While on a road to Everest I was busy booking the next part of the summer holiday. A tour to Zhangjiajie in Hunan Province. Home of the mountains that inspired the Hallelujah Mountains in the film Avatar. Another mountain top moment – definitely.

We had known people who had done this area on their own, but to preserve our marriage to see it into the 15th year we thought that going with a group that would take us to see points of interest would be the best thing. I am a member of a WeChat group, Travel in Asia and Suzhou, China with Style. in those groups is a travel advisor, Amy. She posted about Zhangjiajie and we signed up, alongside another family that consisted of two sisters, one husband and one child – a boy the same age as Eleanor, the three adults were ethnically Chinese, the husband and wife lived in Suzhou but like the boy and his mother held American passports. It was a perfect travelling group really as the two children kept each other company.

Zhangjiajie with its forested mountains was billed as an oxygen bar, which was perfect after the lack of oxygen in the Tibet Autonomous Region.

An early morning flight from Pudong airport meant that we treated ourselves to the airport hotel the night before, but you know what they say about those who live the closest… they are always late. On this occasion we weren’t late – just cutting it fine… and it didn’t help that the officious check in clerk wanted Eleanor and I to have our full names on our boarding tickets rather than our last name and 4 letters of our first name. So we had to go to the information desk and have our names handwritten on the tickets. It all took time, and we may or may not have been the last people to board the flight…

The early morning nature of the flight meant that we had all day to sight see! Our guide picked us up at the airport and off we went for an early lunch. Lunch time reminded us of Eleanor when she first arrived in China, as despite the boy having a Chinese mum, his taste buds where definitely American, and not for the first time would Eleanor be lauded for her ability to try and eat new things and just get on with it. Eleanor of course played to the audience and tried everything – encouraging the boy to do the same!

After lunch we took the first of the cable cars. The cable cars are made and tested in Switzerland. Whilst I trust Chinese engineering, when the cable cars are made in a mountainous country that is known for its preciseness I trust them. Up and up we went once at the top we were given time to take photos and then off we went to the next part of the mountain. During the 4 days we felt that we were given plenty of time for photos, but gently moved on to the next part of the tour. 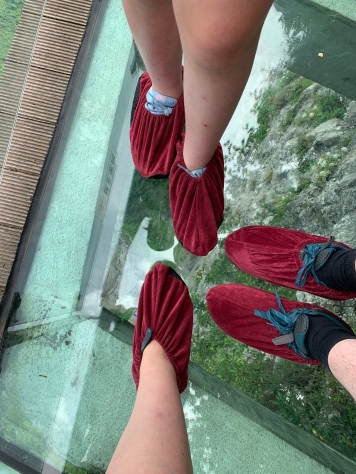 Our first walk on a glass bottom section 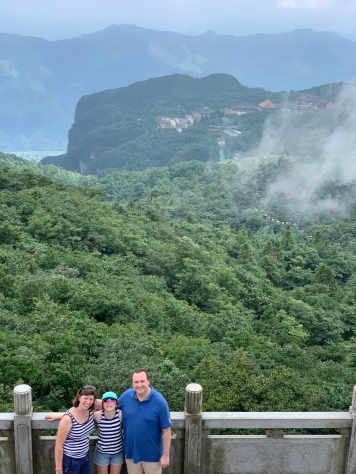 We were heading to see Tianmen Cave, the highest naturally forming arch in the world at approx 5000 feet above see level (1524m ish). It was like the eye of a needle. We arrived at the cave via a series of escalators  tunnelling through the rocks all were going down, and yet when we arrived we were still at the top. – Just another area. And below us, was a narrow road that we would soon be going to down with 99 hairpin bends 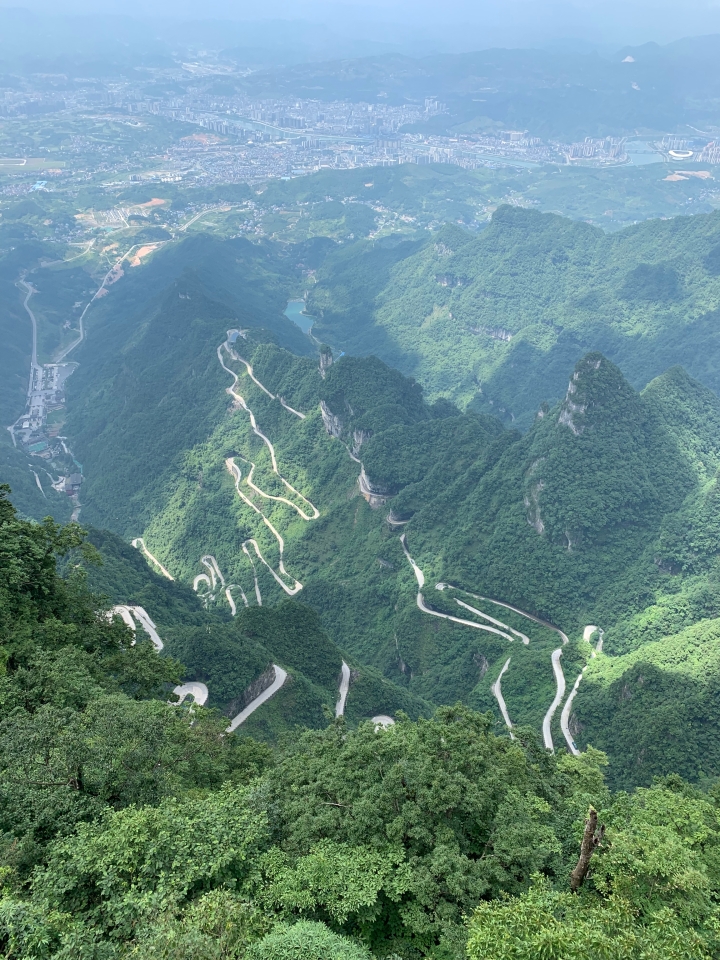 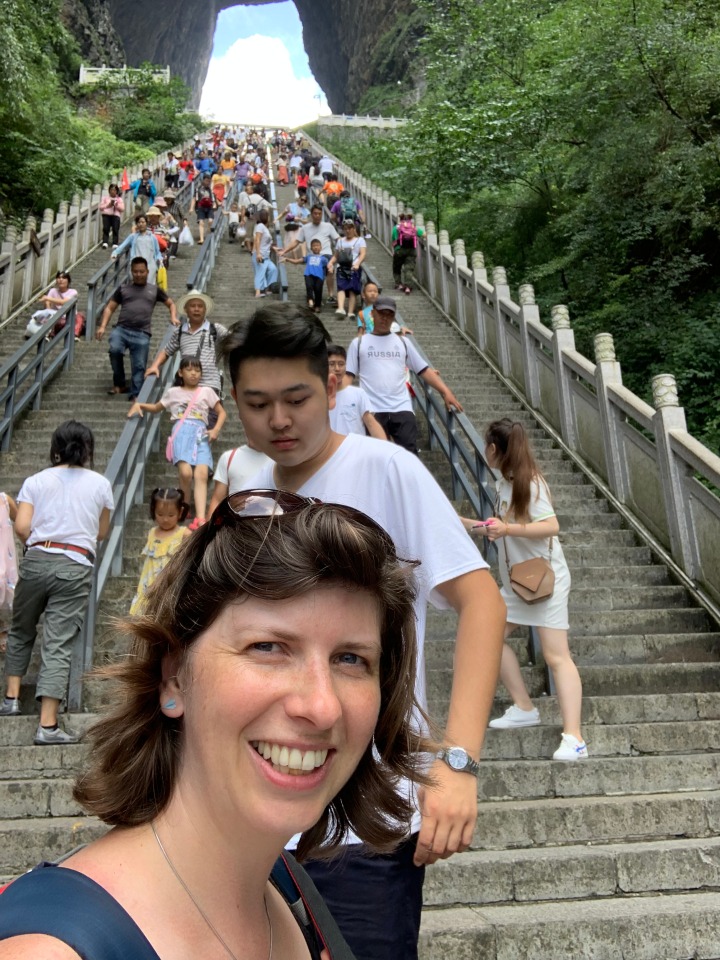 I was glad our guide was experienced enough to the route to here backwards. Many people start by going up the stairs. We were going down them. By the end of the steps, Martin’s knee had given up and our legs were shaking. Mine shook for a good 20 minutes. It was a freaky sensation. We got to the bottom of the 999 steps to see that there was in fact escalators down and up – again going through the mountain. We all agreed that we were glad we did the steps, but that we would not want to go up them or come down them again!

9 in Chinese culture is lucky, thought to be related to longevity, the walking of these 999 steps and doing the 99 hair pin bends must mean that Martin, Eleanor and I are going to have a long life – maybe!

We went to dinner, and then we were booked in for a show. But dinner finished too early so to kill time we all went for a foot massage. Our feet needed it. It also included a back massage while our feet soaked. It was the best hour that day when our feet got a well deserved pamper.

The show we went to see was odd. Though not the oddest that we saw in the 4 days we were there. It was a motorcycle/car stunt show. After a long day with a early morning start the 7 of us agreed that we could all have done without it. 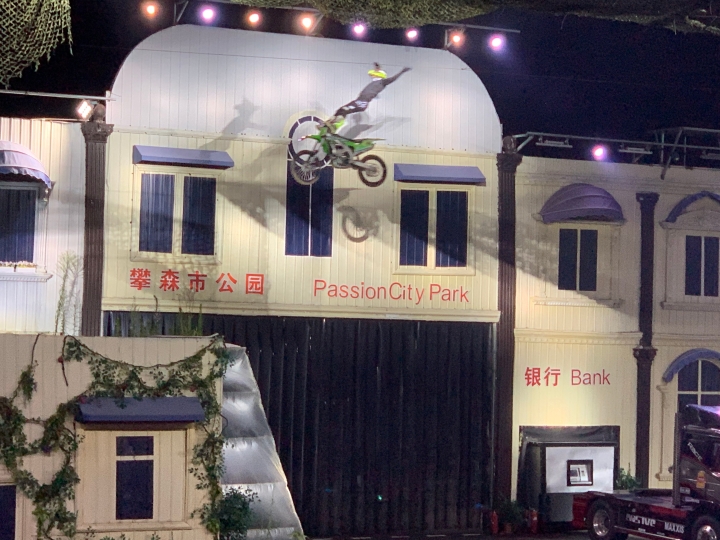 And if you want to see the best way to get up the 999 steps check out this stunt by LandRover in the Dragon Challenge. It showcases the hybrid Range Rover Sport SUV, though I am not sure I would have the nerve to sit in the passenger or driver seats. Maybe walking down is the best way! 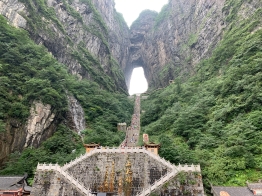