I first came across the phrase of “mountain top moments” when I was part of GirlGuiding UK’s Centenary Planning Committee. What would your mountain top moment be in 2010? Mine was planning and being at the Young Women’s World Forum which was part of the Finale of centenary celebrations on 20 October 2010 (20/10/2010). Since then, well since moving to China, our mountain top moments have been pretty continuous, in reality we should just have these moments and not refer them to as “once in a lifetime experiences”.

Because of my iPGCE and the fact that we had gone back to Ireland and Northern Ireland to see my parents for Chinese New Year, we didn’t feel the need to go back to the UK for the summer. So we didn’t. Instead we went back to Tibet. Well Eleanor and I went back, and Martin went for the first time. The first time, Martin had been due to come with us but at the last minute went back to care for his Mum who had broken her shoulder.

Term ended and rucksacks packed we took the fast train to Beijing, changed train stations and took the train from Beijing to Lhasa. 40 hours and 45 minutes after leaving Beijing we all arrived in Lhasa. We couldn’t get train tickets from Shanghai or Suzhou. We were all healthy going – no colds, Eleanor was 18 months older than the last trip, we were going in the summer, would the altitude still affect Eleanor, how would it affect Martin and would I be affected this time?

Martin was fine, I was fine. Eleanor ended up in the same hospital again as our last visit in December 2017, again attached to oxygen suffering from mild altitude sickness and prescribed tablets that were massive! But at 108 RMB to be seen by a doctor, 1 hour of oxygen and tablets I couldn’t believe that we were paying so little, that I wouldn’t even dream of claiming this back from the insurance company – either MSH China or Journeyman which is insurance specially for expatriates.

Martin and I looked at flights out, we were flying out of Lhasa this time round anyway in 10 days time as we had not wanted to do another 40+hour train journey. We talked to the insurance company who said that she would have to be bad for them to pay out. She wasn’t. I suppose we could have pressed the hospital to say that she was bad, but after an hour of oxygen she felt much better. It was just the night times that was the worst. But Martin helped regulate her breathing at night which was great and she really did begin to acclimatise. During the days, Martin would go out on the tour. The first day was Potala Palace, I made sure he did that! Then the other monasteries which last time Eleanor and I sat outside. Martin went to them. I still haven’t seen the Monks debating at Sera Monastery…

And then the discussion happened. Could I go to Everest on my own with the group and leave Eleanor and Martin behind? The answer was yes. The sweetener for Martin and Eleanor was a trip to the Intercontinental Hotel, Lhasa. It boasts piped in oxygen at night to the rooms. This was perfect for them both. Not ideal. But we hoped that once I came back from Everest then we could do the next part of the trip.

And so I left with the tour group and visited all the places up to Shigatse that Eleanor and I had done 18 months before. This time though it was busier! Going up to the first Holy Lake, there weren’t enough parking spaces for one of the view points so this created a tailback.

The views were still breathtaking the second time around. (The photos being uploaded are all from my phone as don’t have access to my DSLR photos while not at home)

After a night spent in Shigatse, we left early in the morning and drove on towards Everest. One of the group went back to Lhasa from Shigatse as he wasn’t feeling well, so he decided not to risk it – he had even been taking the western anti-altitude sickness medicine, so even that isn’t 100% foolproof either.

Along the way the two of us from the Shanghai area stopped at the wall which commemorated the 5000km road between Shanghai and where ever this might be!

And so we kept going up and up before stopping at another pass. There was cloud. But we waited and waited, until just in the distance we saw Mount Everest, in Tibetan: Chomolungma ཇོ་མོ་གླང་མ and in Chinese: Zhumulangma 珠穆朗玛.

From afar you get a sense of perspective, you get to see that it is head and shoulders higher that the other mountains in the Himalayas (Mahalangur Himal sub-range of the Himalayas)

Back on our mini bus we drove on, and then it was close… but just not close enough. The unmistakable triangular point.

Eventually we arrived at a bus park. And we transferred onto electric buses that took us right to Everest Base Camp on the Tibetan side. A lovely, smooth tarmac road. I know from a friend that of course it has not always been like this!

We got to base camp and to our tent for the night. Not everyone gets to stay in the tents, there is a hostel for want of a better word. The “tent village” is quite big, but the numbers in each tent is limited and while there was only 10 of us and there were 10 spaces, only 6 of us were allowed to stay in the tent. There was a family of 4 with us so they opted for another tent. Apparently there was a foot count in the middle of night by some official who came in, felt for our legs and left again satisfied that we had not brought any additional bodies in with us after lights out. I was bundled under a lot of layers and fast asleep when this happened so felt nothing, but was reliably informed by people who struggled with sleeping at altitude. The count we were informed is so that the locals who own the tents get an equal share of the money coming into the base camp. *It was the best night’s sleep that I had during the whole holiday. But Martin was annoyed that I hadn’t got up in the middle of the night to go stargazing!

There was one restaurant that we went to for dinner, overlooking sunset. We could have ordered food in the tent which the family who owned the tent would have cooked for us – when we asked what was on the menu it was noodles. Pot noodles. We declined.

Toilets at base camp were grim. 1) They were squats. 2) On arrival in the afternoon they were fine and pretty clean 3) By 10pm they were disgusting. Used toilet paper overflowing in the bins etc – will leave the rest to your imagination. Hold your nose and go. In the morning, I got up to see sunrise, I did not go to the toilet. Preferring to hold on until the green buses had taken us back down the valley to cleaner toilets. 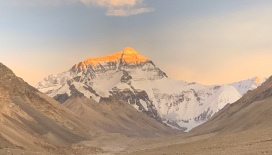 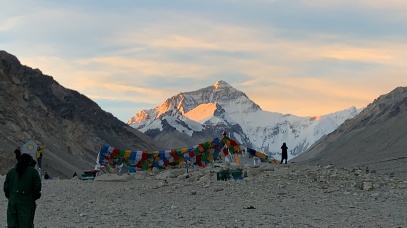 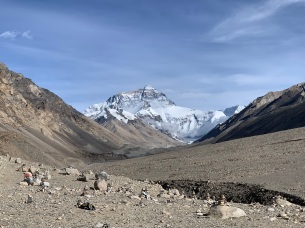 I have probably close to 100 photos of this giant of a mountain. When we arrived, as we walked towards the stone confirming our height at base camp, during dinner, sunset, and sunrise. Just as we were about to leave the following morning, the cloud descended and stole the top. It is majestic. It is beautiful and I could have watched it forever, but do I want to climb up it – no. I am not a mountain climber and have no desire to be. I will be a tourist and come here the easy way – by bus – but dealing with altitude in that you can’t run, climbing a flight of stairs or going up a slope to where the toilets were took it out of me. So I admire anyone who climbs Everest. But this summer the picture of the queue to the summit was published, and as I viewed it from 5200m I wondered who was at the summit looking down (8844.43m). The queue to the top to say they have conquered Everest is most definitely worth it – but is the climbing tourist industry worth it for Everest?

So for me, this is definitely a mountain top moment.

From Everest Base Camp we returned to Lhasa. I found Eleanor recovered enough that we decided to carry on with the next part of the trip which was to Namsto Lake (Heavenly Lake), the second largest salt water lake in Tibet. This was not on the itinerary in December 2017 because snow and ice in the winter make it inaccessible. The road in parts during our journey disappeared because it was being resurfaced, so after a long bumpy journey – with no lunch (6 hours plus) we arrived at Laken Pass – 5190m above sea level. Here we also put down a prayer flag in memory of John, father of our good friend Claire who sadly passed on in June.

At Namsto Lake we really felt the summer sun, we had a walk round, posed on some yaks standing in the lake, did some more posing and then went back to the van. Another hour later, still without lunch and snacks having been demolished a long time before, we arrived at the “hotel”, maybe a guest house. We found a restaurant, we would have liked some Tibetan food, but the first restaurant that looked open served Chinese food. We were all hangry.

Finally back in Lhasa the next day I persuaded, more like bribed, Eleanor (Martin didn’t need much persuading) Eleanor to walk to the Potala Palace and do something as a family that we hadn’t done or indeed realised was even a thing during our previous visit… pose with the 50RMB note. 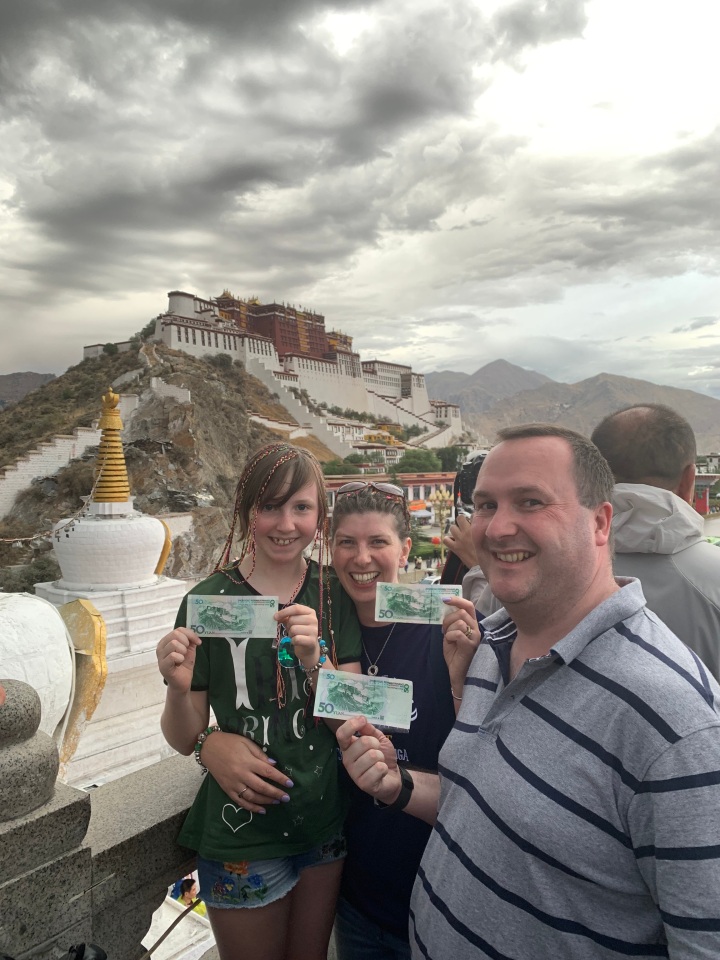 This was clearly a shortened version of our summer in Tibet. We went with the same tour company as last time, Budget Tibet Tours. They gave us a discount, and indeed gave our friends a discount when they followed in our footsteps a couple of weeks later. They were superb with Eleanor. I got money back because I went to Everest on my own so the hotels didn’t charge for Martin and Eleanor. Thanks must also go to International SOS because they again organised the hospital visit for Eleanor.

I would love to go back to Tibet again. I really have fallen in love with it. Would I take Eleanor back with me… absolutely. When she is much much older. And she wants to go back too. We reckoned that actually taking the time to acclimatise is the key. And so if it takes a week in the intercontinental with piped in oxygen at night before moving to another budget hotel like the Yak (name of hotel in Lhasa that we stayed it!), then so be it.