My dreams of a full night’s sleep were shattered at 1am when I was woken up by a very distressed daughter. I knew that she needed oxygen, she said that at least three elephants were sitting on her chest, she had a headache, sore tummy and was extremely restless. I gave her some calpol, and more oxygen – but we only had the oxygen in the can. 2 of them to be precise, and I reckoned they weren’t going to be enough to see us through the night. 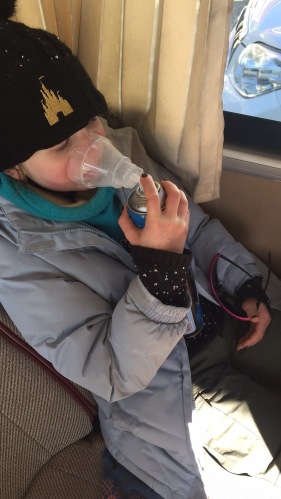 I went down to reception, leaving her with oxygen to see if I could get more. But being 1.30am there was no-one, save a man who walked into reception a little worse for whatever he had been imbibing. I could hear someone coughing from behind the door that was behind reception, so I shouted hello and eventually the woman groggily put her head around the door and after a quick explanation she gave me another can of oxygen. It hadn’t been quite what I was after but that was all that was on offer. I was told to tell the guide he had to give her a can back in the morning, or I would end up paying 30 RMB.

I returned to the room and thankfully as it was UK time Martin and one of my other colleagues in the UK gave me the number for ISOS.

We have medical insurance through MSH China, as part of our package with school. On top of that we also have access to ISOS, in theory you can phone and someone will help you no matter where/the time. However, the number had been filed in my emails and I hadn’t done the sensible thing of saving it to my phone. Neither it appeared had Martin. Though he found it in an email, around the same time as our colleague sent it to me.

I phoned, and immediately was put through to a doctor in Beijing. She spoke great English and took me through what I had done, what Eleanor felt, how we had travelled. I mentioned she had come with a cold. The doctor said that she wasn’t concerned about the loss of appetite but would want her to drink plenty. She said that there appeared to be two clinics close by, with one that could send a doctor out to the hotel. We ended the call saying that she would call back in 30 minutes. I gave her details of the hotel and my room number. I was more reassured by just having someone to talk to, but already I was thinking about flying to Chengdu on the 15:15 flight and of course why had we come, but the flip side was that I had just paid and didn’t want the money to be wasted.

By 03:30 when the doctor phoned again, Eleanor had gone back to sleep – the calpol had at least worked. She said that no-one was answering the phone at either our hotel or at any of the hospitals (reassuring…. not), she was content that Eleanor had gone back to sleep and said that if anything changed to phone her back, but for me also to get some rest. She said that she would try to arrange an appointment for the clinic the next day, but that our medical insurance would not be accepted. I asked tentatively about the potential cost – I had just been paid and “for everything else there’s mastercard”. She responded saying it wouldn’t be thousands – more like hundreds – I forgot to ask the currency but assumed/hoped it would be RMB!!!

She said she was on the night shift and would phone me in the morning. I did fall asleep and woke up just before 07.30, my phone rang at 07:40 and Eleanor stirred at 07:45. They would let me know when the appointment at the clinic would be.

I went down for breakfast on my own. I met with Sonam and explained that we would be going to the hospital. He came up with me to the room with a large oxygen tank and saw we had the window closed – he immediately opened it, saying that because we did not have a flow of fresh air that would have made a difference to the oxygen levels in the room.

The afternoon arrived and at 14:30 we left lunch and went to the Women and Children’s Hospital in Lhasa. The guide helped us check in, I paid 2 RMB for a plastic credit card type thing which Eleanor’s details have been stored on.

Sonam then left us to fend for ourselves. ISOS had said that I could phone them when seen by the doctor so that it we could have an interpreter. Almost immediately I had to phone as two nurses came to ask us the symptoms. Then at about 15:00 we were taken into a room with two doctors – both seeing patients – no patient/doctor confidentiality there. Once again I phone ISOS while Eleanor was having her chest and throat checked. My interpreter told me that her chest was clear which was good news as I hadn’t wanted her cold to go down into her chest. When I asked the question of whether we could go to Everest, my head was telling me that it was going to be unlikely. The answer was that we shouldn’t go any higher than what we were at already. The “remedy” for Eleanor was two hours of oxygen and we would need to come back every day for two hours, unless we had a canister of oxygen – not the cans but the big tanks – and of course by now we did, so that relieved us of daily hospital visits.

At 15.30 we were then taken to the third floor for the administration of oxygen. But I had to pay first… the grand total for a liquid substance like calpol, 10 vials of a brown liquid to restore Qi, two hours of oxygen and a consultation… 126RMB (GBP14ish and USD19ish). I had of course come prepared for Eleanor – iPad and films, but nothing for me. It was also cold in the hospital, so I was reduced to sitting on a stool with my coat on texting people and trying to work out a new itinerary that would not include Everest Base Camp.

We were in a room alongside a little boy on a drip, it was a fun two hours, but we talked to Martin and my parents. An Australian doctor from ISOS in Hong Kong also phoned me as a follow-up to the appointment. She saw that we had wanted to leave Lhasa and had no problems with us going to Shigatse over the mountains, she just didn’t want us to stay at that level of altitude. She also picked up on the cold that Eleanor had arrived with and the time that we had called that morning. She confirmed that we wouldn’t know whether E was going to be susceptible to altitude sickness in the future, whether it was the cold, but that to do Everest we should go to Kathmandu and take a flight over it! The timing of when I had phoned was also significant with it being in the night when our bodies natural defenses are also at their lowest.

2 hours of oxygen later I had a different child. Sonam collected us, we went back to the hotel then got a rickshaw to a restaurant for dinner – well restaurant might be stretching it…. as it was KFC – the first international chain to open in Tibet Autonomous Region. Neither of us ate well, but we kept drinking.  KFC and Burger King are there, but sadly there is no Starbucks. Which means no mug for the collection.

Back to the hotel by rickshaw again (on the way I paid 10 RMB, the way back was 15 RMB but he got 20 as that was all I had). E had a little bit of oxygen was taken while I packed since the next day would be Shigatse – for one night. The night’s sleep – straight through. We slept with the window ajar, the oxygen tank was off and both of us got some rest.

Not going to EBC now freed up two days. One night was to be spent by the group in the monastery there, the next night in Shigatse before coming back on Friendship Highway to Lhasa for the 1st January. The evening of the 1st, Martin and I had already planned to stay at the Intercontinental Hotel as a little bit of luxury before 2 more nights on the train, so I booked a second night – for New Year’s Eve – I thought we may as well spend it somewhere warm! (I hoped). The plan was to go Shigatse with everyone, and then come back on a nearly 3 hour train back to Lhasa, spend one more night at our cold government rated 4* hotel and then go to the Intercon. We were also to travel back to Lhasa with the self-professed selfie queen, Carmen who was not doing EBC either.

Having arranged it with BTT and Sonam I found I was then eligible for a 270 RMB refund and they were paying for the train. I didn’t argue too much!

Thanks must go to my school who have got ISOS for us. I am sure MSH China, our medical insurers provided by school would have been fine, as well as our own travel insurance guys at Journeyman Services. ISOS were brilliant and I have no hesitation in recommending them. The only downside was that no hospital in Lhasa answered the phone at 3am!!!

Before bedtime I went out onto the rooftop terrace, stacked a pile of books up from the outside library to stabilise the camera.

4 thoughts on “Roof of the World Part 3 – Oxygen needed”