We are very lucky to have such a caring man in the shape of Martin. He absolutely puts family first, he is kind and generous, but in the middle of the night, deprived of oxygen and sleep and decent food, I kind of forgot that – two nights in a row.

Having done Mongolia with a then 7 year old, I didn’t think too much about travelling on my own with a child at the time, it was pretty safe. Of course, she went to Mongolia full of intrepidation as it had been a semi horse-riding holiday and she had fallen off a pony 5 weeks before travel and been unable to “get right back in the saddle”. But both of us had had an enjoyable holiday, there was plenty to do that had taken her mind of missing Martin and there had been other children on the tour.

Sonam had told us in the car the night of arrival that Eleanor was the only child and that didn’t go down too well. But she didn’t dwell on it too much as we didn’t know who our fellow tour group members would be. We were both tired and just wanted to sleep in a bed that a) didn’t move and b) in a room by ourselves and c) we wanted to have a shower.

Having checked in the night before we woke up early on 27th December to have showers. Rightly or wrongly we were advised not to have a shower the first day of arrival as it can have an effect on the body and you can get sick. (This had come from Chinese colleagues so really not sure if medically accurate or a old wives tale). So despite spending 2 nights on a train we had held out for the shower. It was lovely. Hair drying with the hotel hair dryer was laborious as neither of us wanted wet hair in temperatures of -3.

Dressing in layers we went down for breakfast. Our hotel room had warmed a little but the dining room of our hotel had the temperature of a fridge. Maybe the hotels in Tibet still don’t put heating on if occupancy is low (which is what the Holiday Inn did in the 80s/90s).

Breakfast was uninspiring but with steamed buns, boiled eggs and fruit it filled a hole. Though Eleanor had lost her appetite. A sign of not coping with the altitude. I got plenty of water into her.

At 09.30 with a breakfast cereal bar eaten we met the guide and the rest of our group. It wasn’t until the next day did the number of group members settle down. Some people arrived late into the tour and others left. A couple just disappeared but Sonam, our guide, later informed us that they had never been booked for any longer than a couple of days. They were both maths students studying in America. She was Chinese and he was American. Over lunch I quizzed them about their itinerary and it sounded as if it was ” a meet the parents” and see some of China trip. The girl had had to join the tour because of her boyfriend as being a Chinese national you can come and go. No need for a guide.

When researching Tibet I had looked at two tour companies – Tibet Vista and Budget Tibet Tours. The former was an all in price and the later was more pay as you go. I am not sure what Tibet Vista’s cancellation policy was, but Budget Tibet (BTT) http://www.budgettibettour.com was if cancelled within 15 days of departure a $100 was payable. (648 RMB). Neither of us thought it was extortionate when cancelling Martin’s place exactly 15 days before departure. And I was pigheaded enough to keep our plans and not fly back either as that would have been more expensive. I also wasn’t in the frame of mind of going back to the UK for Christmas. The other thing I liked with BTT was that they said that in reality because it was off season I probably wouldn’t need to pay entrance fees for Eleanor.

Having been to Mongolia, the two of us have done our fair share of monasteries including Tibetan based ones. Eleanor was not enamoured to hear that her trip this time consisted of at least 3 more of them while in Tibet. We arrived at our first one, Deprung. Set on a hill. We all got out of the minibus, I went to buy the ticket (60RMB), no need to pay for a child. Once the ticket was purchased we then all went through a building housing an x-ray machine and a metal detector for the body. No one around us put their bags through (we had left ours on the bus) and certainly no one checked as to what was in our pockets. We then all got back on the bus and were taken up to the foot of the monastery.

Eleanor lasted 40 steps (and that might be an over estimation). We had taken the steps and incline slowly but for her it was too much. We let the others go on and we sat on the bench watching the world go by before getting cold as we were in the shade and so we returned to the bus and waited for 2 hours for the group to return. I hadn’t planned for this impromptu stop and the only thing I had in my bag was a small game that really tested our mental ability.

We drank plenty of water and then the inevitable happened. A toilet was needed. We have encountered some basic facilities in our time, but this was basic and smelt horrific.  Eleanor had gone in, realised there was no privacy and had come back to get me to at least stand infront of her. She was already attracting attention. I went with her, and got to the entrance and was greeted by a smell that was stronger than I had ever smelt before. Neither of us could do it, so we turned back to the bus and held it in.

So Deprung Monastery is the largest Tibetan Buddhism College with the most number of monks in Tibet. It had been the winter residence of the Dalai Lama before the 5th Dalai Lama moved his residency to the Potala Palace. My photos clearly don’t do it justice having being taken from the car park. 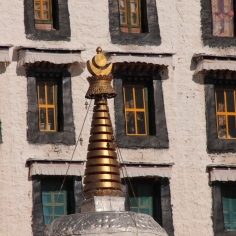 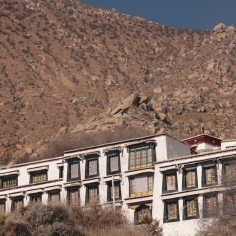 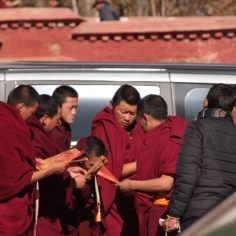 Everyone returned to the bus and we went to lunch. Either a buffet or à la carte. There was practically nothing left on the buffet so fried rice and vegetables it was. We shared with a German student. The “fried” rice was sadly just plain rice and did not meet Eleanor’s expectations. She seemed much better at lunch time, but the slight incline to the influential Gelugpa Monastery- Sera Monastery was again too much. I didn’t even pay to get in and sadly missed the largest scale of sutra debating among monks which is famous across Tibet. However, the group wasn’t as long here as they were in Deprung. We sat on a wall just watching the world go by and a yak and stray dogs wondering freely. We got to people watch the men, women, children going to the monastery and we even video called Martin. We were chatting to him when the group returned. 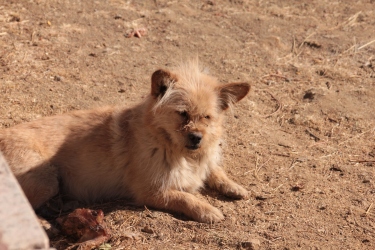 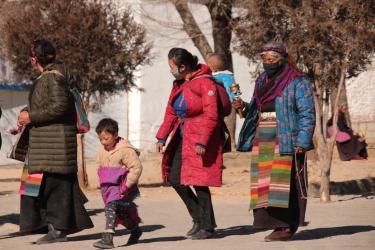 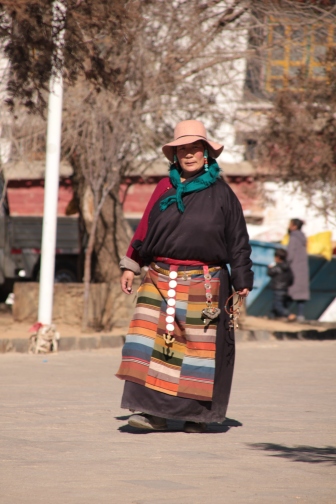 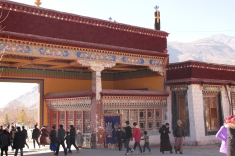 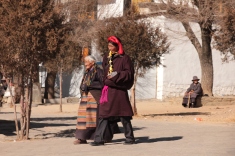 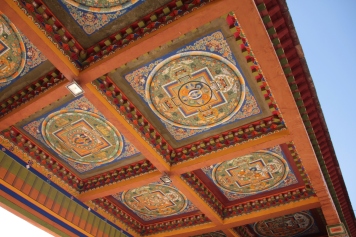 We returned to the bus, and back to the hotel. We then went out for our welcome dinner as a group. The ladies all sat one one table and the men on the other. I was best placed for a conversation with either the guys or the girls and I dipped between them. Our dinner was buffet, soup and curry. Eleanor ate well which was pleasing. I hoped that she would be fit enough to do the Potala Palace in the morning because alongside Everest Base Camp, this was the one place that I did want to see.

Our group now consisted of a Singaporean man, 2 Australian men, a Nepalese lady who had quit her job in the US as a banker to travel and pursue her passion of talking to motivational and inspirational people and create podcasts, an American man who was nearing the end of his time living in Chongqing as he is to return back to USA in February, an Indian man, a German computer science student and a self-professed selfie queen from Malaysia who lives and works in Hong Kong. We were definitely a mixed group, but we got on really well and Eleanor enjoyed being around them.

After dinner most of them left to see the Potala Palace at night and Eleanor and I went back to The Tibet Gang-gyan Lhasa Hotel via a few shops. In one, we bought some tissues (4 packets) for 4 RMB… I handed over 4RMB in coins. Later I realised that the woman looked at me funnily because I had in essence given her money that isn’t used in Tibet. They use the 1 RMB notes, that we hardly use in Suzhou. whoops. I also bought another charging cable for my phone, as all of a sudden that wasn’t charging and we bought some fruit. Our hotel was in the old city and while on the main street of Beijing East Road, the entrance was through a courtyard, so it was very quiet despite also having a back entrance that opened onto the narrow alleyways that were bustling in the daytime with traders and shoppers.

Back at the hotel our room was warmer (not by much) but we got out our sleepings bags and our duvets and went to sleep, with me hoping that we would both get a good night’s sleep.

One thought on “Roof of the World Part 2”