Having been put in a somber mood at Unit 731, I arrived back at the hotel to find roses on the bed as it was Valentine’s Day. We had gone to pizza hut for lunch and while usually a family friendly type of place, we were struck at how many couples had decided to splash out and share a pizza while each looking at their phone. How romantic.

Back at the hotel we layered up. Preparing for our adventure to the ice park which would be in the late afternoon, dusk and then darkness, and coldness.

Prepared to pay another 900 RMB, we paid slightly less. Again there were people milling around, but there were no crowds. We had brought our two sleds with us and we put them to good use, until the cheapest one fell apart. It certainly wasn’t the first one to break that night as the bins were overflowing with broken sleds.

Our first slide down ice

This was a snow field with channels for your sleds

The blocks of ice that created the giant structures reminded me of Fox’s Glacier Mints, transparent, and smooth and dry to touch (unlike the mints which of course are sticky!) The craftsmanship was extraordinary, and as we walked up the steps in some of the creations, we happened upon workman laying fireworks for the display, we now know that the display was being built for Chinese New Year’s Eve as we caught the fireworks on CCTV the following evening. 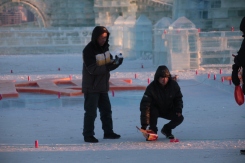 I am sure that if this had been in the UK they wouldn’t have let us anywhere near this site.

As day turned to dusk, the ice buildings were lit up in bright colours. The photos don’t quite do the structures justice, but it does highlight the scale.

The sledding down the hill was free, but around the park there were dogs, horses and reindeer (not all together!) pulling sleighs. Probably for a handsome price, which we didn’t pay! There was also a chance to ringo down a hill, but sadly Eleanor didn’t quite make the height restriction, and – honestly – I was glad about that, health and safety weren’t quite as high on their list as I would have liked it to be. There was also a massive queue for something, queuing for a ride in Disney in the warmth is fine, but queuing in minus temperatures standing still – never. We never actually found out what the queue was for, so we don’t know what delights we missed.

Dinner was at KFC! Makeshift fast food chains were making a fortune. Never have I paid so much for a KFC as I did that night.  Maybe I ordered more than usual, but I didn’t order that much to warrant paying nearly 30 GBP. A bit like Disney – we were a captive audience in need of hot foot fast.

There are apparently shows to see in this park, but again there were many ice sculptures to see and we spent a lot of time sliding down the hills taking our lives in our hands to be queuing up for shows. The hill we used for sledding had pre made runs down it, on  all 4 sides of a rectangle (see above). We all went down at varying speeds and made it to the centre – nearly missing the other sliders coming down adjacent slides, and of course there were people who walked across the channels as people were coming down at speed. We didn’t see any accidents, but that isn’t to say there weren’t any! 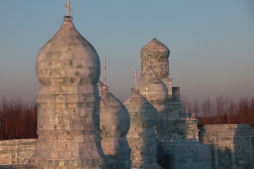 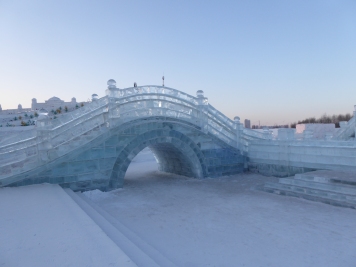 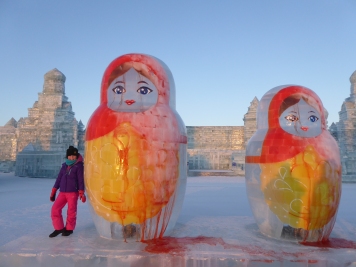 The colouring on the dolls appeared to be wax

It was cold but we stayed out until just after 8pm, leaving before others so that we could get transport back to the hotel. It was a lovely afternoon/evening – very different from the morning.

The next morning, in two minds, we went to the Siberian Tiger Park. We had expected it to be busy as it was  Chinese New Year’s Eve, and while it wasn’t full to bursting those of us who arrived early were packed onto a bus to tour the tigers. Sadly we arrived the same time as a tour, who got priority on the bus. The rest of us followed suit, but it quickly became apparent that they had only allocated seats for the adults, and not the half fee paying children. Children were then made to sit on their parents knees and everyone shoved up so that actually there were more seats available so Eleanor managed to get her own seat. It wasn’t a comfortable bus tour. Everyone had layers on, making them larger than normal, those layers necessary to keep the cold at bay, were then superfluous on a heated bus. We also got the short straw – sitting in the middle of the back row, with mesh over the windows preventing good camera shots.  Nevertheless we did our best and were rewarded.

Siberian Tigers are the largest felines in the world with the males weighing in at around 300kgs. However their size has been no match for poachers and their numbers were dwindling. The Chinese government in 1986 decided to implement a breeding scheme, which resulted in the centre in Harbin being established. However, it is a dreary place. The Siberian tigers certainly have plenty of outside space which we saw as the bus drove us through the area, it was not a conventional safari park that we used to visit at Longleat, Wiltshire in the UK. There wasn’t much shelter, no trees or bushes and of course this being China you could buy food to feed them…

We declined, but when we got of the bus, we were then escorted onto a covered walkway which was above the enclosures. We saw people buy chicken fillets and poke it throught the wire fence. On the whole the people let the meat go (held by tongs!) when the tigers jumped for the raw (dead) meat. But we did see live chickens in a cage. They were shivering so badly that they probably weren’t long for this world anyway and feeding them to the tigers by dropping them down a shoot was probably going to be a humane quick death. But even so, we walked on. 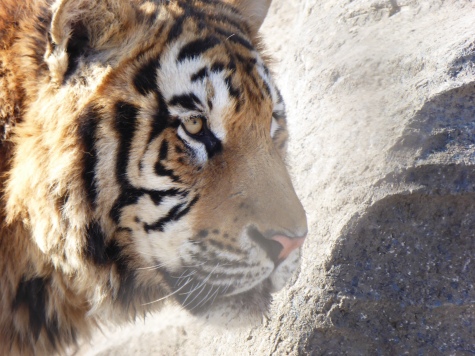 These are Eleanor’s photos. She waited an age for the yawn to happen.

The tiger enclosure which while not great, was ok, but as we walked to the exit we then saw that the tiger enclosures had been luxurious given that they had a fair amount of space. We saw panthers, ligers, and jaguars all in cages that were much too small for the animals held there and they were not fit for purpose. That was a sad ending. It has prompted us to think of a safari in 2019. When I was in South Africa in 2003 with Girlguiding on a  GOLD project (Guiding Overseas Linked with Development) the team of 5, plus a South African guider were fortunate to travel to KwaZulu Natal by minivan from Johannesburg. We saw amazing scenes, including a baby hippopotamus blocking our way, with mama hippo looking on. I want Eleanor and Martin to experience that and to give Eleanor a real sense of what these animals in captivity are missing.

We left the tiger park having seen some beautiful animals. Our feelings were mixed, but the big cats are making a come back in their natural environment thanks to the breeding programme here.

As we had ventured out of the city centre, we had a few issues getting a Didi back to the hotel. Finally we managed, though we had to walk out onto the main road and hail a taxi the old fashioned way, rather than being dependent on a mobile app. Back in the city we went for a Russian lunch, served in the Chinese way – everything arriving at different times. We booked a Didi for 5am the following morning, slightly apprehensive that a)the driver would cancel on us as it was 5am on new year’s day and b) if he didn’t cancel, what state would he be in if he had been celebrating the new year with baijiu.(Báijiǔ means “white (clear) alcohol” and is a distilled spirit usually 52%)

We all went to bed early, having been invited for dumplings by the hotel at midnight which we declined. However, the fireworks had started early across the city, and at midnight the hotel let off fireworks/firecrackers 12 floors below us. I can only imagine that what we experienced that night is what hearing a gun battle is like. Eleanor was sound asleep with Martin’s noise cancelling earphones on.

The driver did indeed turn up getting us to the airport in plenty of time. Our flight as I mentioned in part 1 departed on time, and we were home by 11.30am. It was a short break, enjoyed by all. Cold, but as long as layers were on it didn’t feel cold. We were well prepared. The holiday I feel was sponsored by Decathlon. The sports store that kitted us out with thermals, Martin’s coat, Eleanor’s trousers and both their boots. My red coat was bought online. I had bought a white one (how practical a colour), but in Tibet is had gone a grey colour with the dust. Washing it though it went an even greyer colour. It hasn’t gone to waste though, one of my tutees collected winter clothes to go to Yunnan province, and so somewhere someone is wearing my slightly grey warm coat. The red one – is slightly too short in the sleeves, but it is warm and kept me warm in Harbin so I can’t complain. It is also great on the e-bike keeping the wind at bay.

Having done New Zealand in their winter, Tibet at Christmas and now Harbin, we won’t do cold country for a while. Roll on spring and summer… talking of which it was 26 degrees on Sunday, shorts and t-shirt weather. It didn’t last until Monday, but it was a cheeky taster as to what is to come in the next few weeks.

Thank you all for reading.