This blog might be particularly apt, if you are knee-deep in snow in the UK thanks to Storm Emma. Though, our snow days happened in January and weren’t quite as newsworthy.

The long-range forecast on the iPhone weather app said there would be snow on the Thursday, and while temperatures were cold, the skies didn’t look as if they would soon be dumping snow on the ground. Eleanor and I had resorted to going in by taxi for a couple of days as it was just too cold to go in by e-bike. From the week beginning 22nd January, there were rumours that we were going to have a big snow storm, staff remained skeptical, students hopeful.

On Tuesday afternoon we were told that our school would close on Wednesday afternoon for two days, all the boarding students that could go home, would go home. On Wednesday afternoon Eleanor’s school was told that there would be no school on Thursday or Friday. There was no snow on the ground at all when the decisions were taken. But the Suzhou Education Bureau had decided to close the local schools on Thursday and Friday in anticipation of the weather. While international schools are independent of the bureau, the closures were made in consultation with the local traffic police, the weather forecast and the safety of all concerned was taken into account.

You couldn’t help sing the Shakin’ Stevens song when we woke up to snow on Thursday, despite it not being Christmas, it felt christmassy when the snow did arrive. To the bemusement of our Canadian staff who had got snowed in at Christmas in Canada, the snow was nothing like what the UK is experiencing just now, but we live in a city that really isn’t cut out for the snow, and of course is it a rare occurrence to driving can be hazardous.

The snow on the Thursday was perfect for snowmen, and because we were prepared for Harbin, we got our snow boots on and got building.

The roads weren’t gritted, but the chemicals they sprayed cleared up the road well, but the e-bike lanes weren’t touched so black ice was an issue. 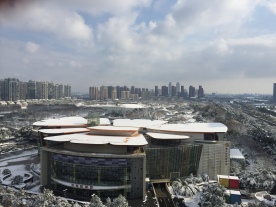 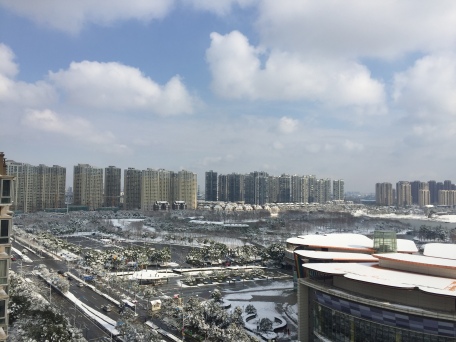 On Friday it was due to be the staff Chinese New Year dinner to celebrate the Year of the Dog, but despite the blue sky and the sun making an appearance, the temperatures at night dropped and it just wouldn’t have been safe to drive or to get a taxi.

It was a welcome break for us all, even if there was no huge sustained snowfall, everyone had hit the ground running just after Christmas with exams, so a long weekend was lovely. Martin got to spend two days (and the weekend) focusing on ISCMS (International Schools Choral Music Society), which was the following week and as it was being jointly hosted by Dulwich College Suzhou and Dulwich International High School we were all hoping the snow would disappear and not cause any problems – which it didn’t. The festival was well received, the concert at the Suzhou Culture and Expo centre was a sell out and Martin who co-organized the four-day music festival was really proud of what everyone achieved. He was singled out for his part in the organisation and while Eleanor was sound asleep, I saw him get his flowers! Remarkably I didn’t fall asleep, but Eleanor can be forgiven for being asleep as we had been up since 4.30am to go to a swim meet. How she fell asleep to Carl Orff’s Carmina Burana I will never know – but maybe swimming 50m and 100m races for all the strokes had something to do with it.

Next blog… all about Harbin.