Waitomo has a population of 41. But in an underground network of caves, hundreds and thousands of glowworms. Spellbound is the name of the company we used to see these miniscule critters. And spellbound we were. There is another company that offers glowworm viewings, but that is combined with black water rafting, and is this was the winter, I would rather have a more sedate pace. We made it from Rotorua in good time, and instead of the 3 hour tour starting at 3pm, we managed to be “squeezed” in on the 2pm, we a Danish couple. Yes, there were only 5 of us on the tour. A tour that usually will only have a maximum of 12, was always going to be intimate.

Now I would love to say that the photos in this blog are mine, but they are not.  They were supplied after the tour by Spellbound. To take these photos you need to a) know the manual settings on your camera  b) you need to know how to work your camera in the pitch black c) a tripod d) time. Upon arrival at the office in Waitomo, we piled into a minibus, and drove about 20-30 minutes on an unsealed road. The caves we were to go into were on private farmland. The word “Waitomo” comes from the Māori language wai meaning water and tomo meaning a doline or sinkhole. The Māoris definitely named this area correctly. The caves are formed in Oligocene limestone, and there are many sinkholes on the farmland.  When we got onto the farm, the 4 adults chose to walk down the chalk pathway down to the cave. We met Eleanor and the driver/guide, Norm, at the mouth of the entrance with our hard hats. 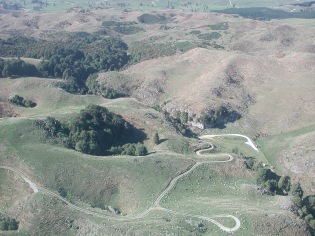 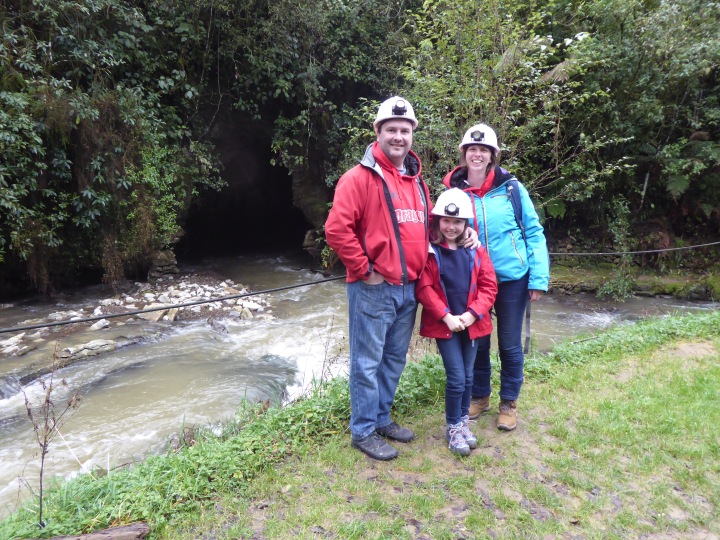 Into the mouth of the cave, alongside the river. We went a few meters, turned our headlamps off – pitch black. Our eyes hadn’t adjusted and so it was just black.  We couldn’t our hands let alone the person beside us. We ventured further into the cave by torchlight, and then we turned our lights off again. By Norm’s torch we saw tiny threads. The glowworm makes its home in the cave by attaching a silk hammock to the cave ceiling. To catch food, the glowworm larva builds a network of silk threads that hang down vertically all around, and also within reach of its hammock. As the glowworm extrudes each line from its silk glands, it places droplets of very sticky mucus over the thread line. Then the torch was turned off, and we saw little tiny lights, the glowworms. The pictures that I took, are mostly black. 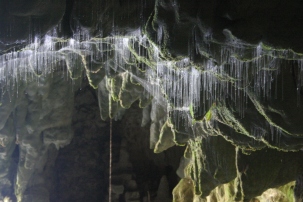 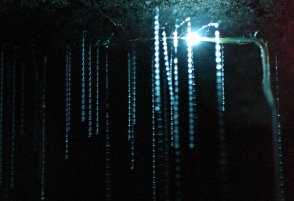 We walked further into the cave, and then into the raft. From then on, we were told to keep quiet, more difficult for one person in our group, and not take any pictures. The raft was attached to a rope system, all installed by Norm and his colleagues. He pulled us along, getting closer to a waterfall as we heard it but never actually saw it. With not taking photos, and not being allowed to speak, our eyes were glued to the ceiling. The length of the river we travelled was full of light provided by these glowworms. I think my mouth was open in awe. As to how long we were in the boat for, I really don’t know. Time was suspended, this was just phenomenal and no-one’s pictures will ever do it justice. It was like a very starry night. Our sense of sight was heightened because we weren’t speaking. And when we came of the raft, we kept our lamps off, and what we had not been able to see at the start of the tour, we were able to see because our eyes and brains had gotten used to the darkness. This picture is not our group, but it is what we experienced. 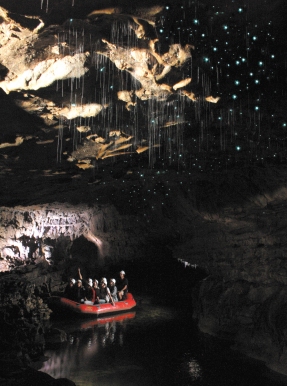 After the first cave we had some hot chocolate, tea or coffee and very dunkable biscuits. Then it was onto the second cave. A cave that had been explored by Norm and his colleagues and they had then made it accessible, putting in lights and a concrete path. This cave was more about the animal and bird bones found rather than the glowworms. The glowworms were so prevalent in the first cave because of the river being a food source. To read more about Spellbound and the second cave, visit http://www.glowworm.co.nz/waitomo-caves/caves/

This was an aptly named tour. It entranced us. We ate in a restaurant that had been recommended by the YHA staff, HUHU. The fire was roaring when we went in, we hadn’t reserved, but a table was easily found for us.  By the time we left, the place didn’t have a table available – and this was on a weekday with a population of 41!

The next day we were on our way to Hobbiton via Otorohanga Kiwi House and Native Bird Park. To be fair, from Waitomo we had to go through Otorohanga, which was 15 or so minutes up the road. We had got to Rotorua and suddenly realised we hadn’t seen a kiwi bird. We couldn’t possibly come to NZ and not see a Kiwi. We looked at places in Rotorua, but because our timings were tight, we couldn’t spend quite a lot of money for a short amount of time. The Otorohanga Kiwi House and Native Bird Park was good value we thought. Arriving at 10.45ish, we went into the first nocturnal kiwi house. Nothing. Went to the second nocturnal house, nothing. BUT we did see a kiwi start to get up, and preen itself inside the nest via kiwi CCTV. One other was sleeping. We were pretty hopeful that the preening kiwi who was also digging for food in the nest would soon come out to the dark viewing area and find the food left by the keepers. After 30 minutes, we left, and saw the rest of the birds, including the keas and the inquisitive kakas. (see picture below) The keas were in mating season, and the pair that were in the enclosure were sitting on the same branch, but about two feet apart.  It reminded me of some couples who go to restaurants and don’t talk to each other despite being on the same table. 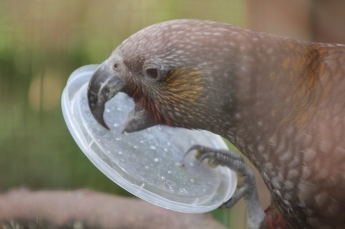 , Having spent some time looking at the other birds, we went back to the second house. The kiwi was STILL preening. We had given ourselves to midday, and if nothing, then at least we had see the bird on CCTV. What we did see, was that the one kiwi that was sleeping, was actually two curled up together. And FINALLY at 11.55am, the kiwi, who Martin reckoned was a girl as it took so long to get ready to come out, made an appearance. As they are nocturnal, the lights are dim, and no photography is allowed. But all good things do come to those who wait and we were so pleased to have had the opportunity of seeing a kiwi. 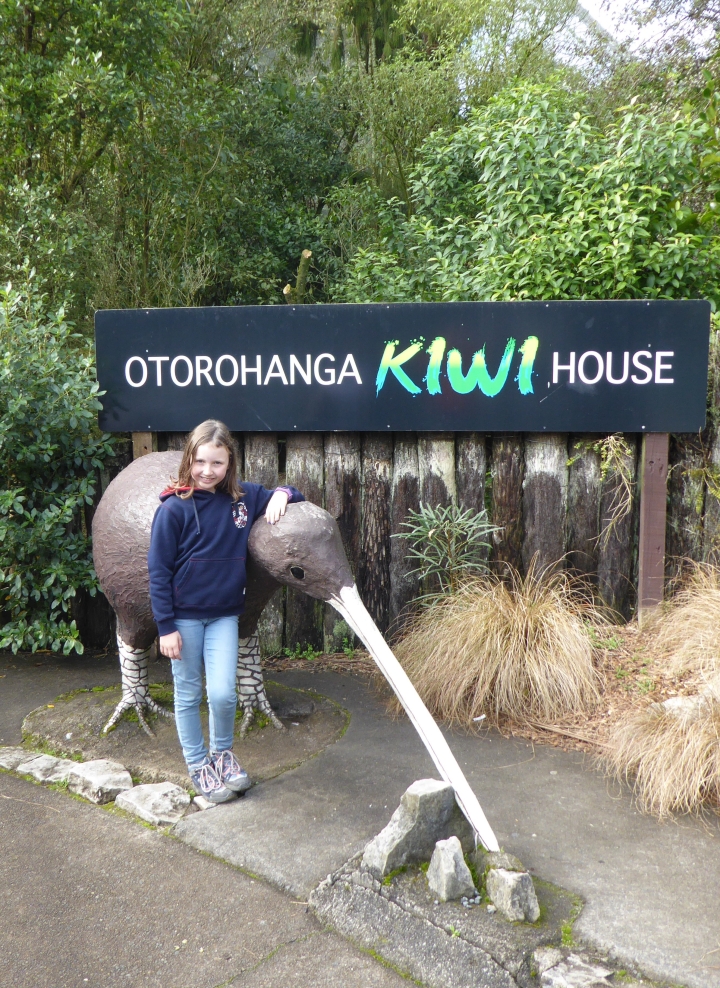 Lunch was eaten in the car, and soon we were on our way to Matamata, home of Hobbiton, the film set for the Hobbit films, and the final treat for the husband and daughter.