At the Hurricanes v BIL match, I was disappointed that this team did not to do the Haka. However, the team gifted to the British and Irish Lions captain, Sam Warburton with a feathered Maori cloak, or Korowai. This was our first experience of Maori culture, and perhaps it was better that it wasn’t the haka as it demonstrated to us that there is more to this country and culture than just the ancient Māori war dance. However, when we did see the dance it was a fierce display of pride, strength and unity. 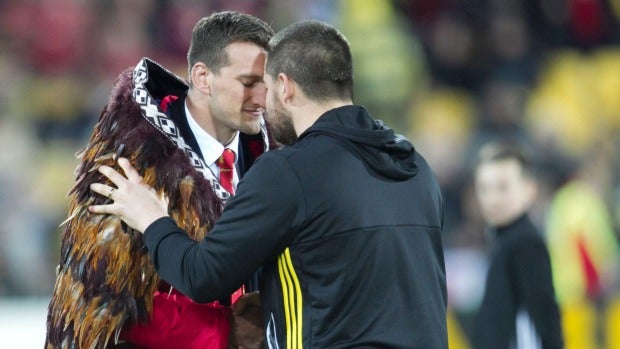 Made by Maori in Horowhenua on behalf of the Manawhenua and Te Atiawa iwi, the cloak was named Tuia Te Tangata, meaning The Binding of People.

Tuia Te Tangata is said to represent the weaving together of the communities, cultures and languages of the Hurricanes family with those of England, Ireland, Scotland and Wales.

It was blessed by Wayne Tamerangi Mulligan, the chairman of Te Atiawa – Taranaki Whanui ki te upoko o te Ika – and named with the help of iwi leadership.

The iwi were honoured to have been asked to provide a taonga for the Lions and their supporters, Mulligan said.

“The Korowai, its name, and the narrative provide both physical and spiritual connection between the Hurricanes communities and those from the British Isles,” he said.

“It is a koha [gift] that embraces and provides warmth to all our honoured guests as the stay in Te Whanganui a Tara – Wellington.”

It was a fitting way of marking respect for the Lions, as well as laying down a challenge.”

“The korowai will ensure there is a lasting reminder that binds the two teams together forever.”

The Tuia Te Tangata narrative was:

The Hurricanes are the people of the four winds – Nga Hau e Wha. We have been brought here by the winds of the North, the East, the West and the South.

The Tuia Te Tangata is a symbol of the weaving together of the communities, cultures and languages of the Hurricanes whanau.

The Tuia Te Tangata binds the many people of Ireland, Scotland, Wales and England, with the Hurricanes whanau, collectively as one. We are bound together by the sport of rugby and its many traditions.

You have travelled to play us at our home Te Whanganui a Tara – Wellington. We will battle you for 80 minutes on the field today, but we will honour you forever.

Our team, the Hurricanes supporters and whanau, honour you, the British & Irish Lions and your supporters.  We cloak you today with Tuia Te Tangata – The Binding of People.

It was not until Auckland that we learnt about the Maoris, knowledge that was then consolidated in Rotorua. We probably could have done a lot more in Auckland, having done the Skytower, the next day it rained. Martin met his school friend, last seen when they were 16 while Eleanor and I went shoe shopping. Every girl’s dream? No. School shoes. Clarks no less. The irony of having lived in Somerset 30 minutes from where Clarks originated is not lost on us. That afternoon, (when it was just windy, not raining) we walked uphill to the Auckland War Memorial Museum. The museum houses a large collection of Maori and Pacific Island artefacts, including a large carved meeting house built in 1878 at Thames, and waka taua (war canoe) from 1830.

There was also photographic exhibition about being Chinese in Aotearoa, planes from the second world war, an interactive children’s area to explore fossils and a very interactive exhibition were you get to experience a volcano without the lava. I have never been in a museum at closing time until Auckland. We whiled away the afternoon here, on coming out of the museum we were greeted with heavy rain. We got an Uber, and spent more time in traffic to get back to the hotel than we did walking. But, we were dry.

We had been told about the website book me as a place to go for “deals” to attractions. I wanted to do a Maori cultural show in Rotorua but had been undecided as to whether to combine it with thermal hot springs or do it separately.  https://www.bookme.co.nz

My mind was made up when we searched for one online. Tamaki Maori Village. The discount was good for two adults, with Eleanor being added on at the end of the transaction for full price at NZ$25 (ages 5-9). For one adult full price it was NZ$120. We paid NZ$84 each. We got picked up at our hotel by bus about 5pm and were driven by a very humorous woman. This is not a place were you go to watch. You go to interact. And that interaction started on the bus. As part of the cultural experience you are greeted by the Chief of the village upon arrival, but because there are so many of us, each bus (about 5 in total and by no means at capacity – maybe about 15-20 on our bus) nominates a Chief. It must be male. No one was speaking up to be our chief, except the 8 year old who kept saying louder and louder “Dad, My Dad, My Dad”. Step on up Chief Martin. A scared, embarrassed and anxious man who was feeling the weight of responsibility stepped up to the front of the bus. Introductions were made around the bus, and then Martin underwent a crash course in how to do the hongi (what Sam Warburton is doing in the photo above). The responsibility of being Chief was on Martin’s shoulders for the rest of the evening.

All the buses arrived and all the passengers were situated behind their Chief while we were welcomed and the solemn ceremony took place.  Photographs are permitted, but because of the light, mine were rubbish. Talking and laughing aren’t permitted during the first part, but once you are welcomed into the village it is more a light hearted affair.

Each Chief was assigned a Maori villager to lead their “tribe” into the village. Before dinner was served we were treated to a number of interactive activities and a couple of informative sessions in the village. It wasn’t as cold as we had experienced, but the fires in the village were warming, if not for us then for our hosts.  Martin had to choose various women and/or men to talk part in traditional Maori games, though all the men had to learn the haka. We learnt about how facial tattooing was originally done, (pretty gruesome and not for the faint hearted), the meaning of wood carvings and of how the Maori people arrived on Aotearoa.

We were then treated to singing and dancing by our hosts. As Chief, the wife and daughter of the Chief got us front row seats! The protrusion of the tongue and seeing the whites of the eye balls during the dancing was fascinating.

Our dinner was traditional Maori fare. Chicken and Lamb as cooked in a traditional hangi, (hot stones buried beneath the ground) was revealed to lots of oohs and ahhs, the grand reveal whetted our appetite. Dinner was buffet style, and there was plenty of food to go around.

At the end of dinner, we were treated unexpectedly to a youth choir who had won a competition in Australia, were touring New Zealand before heading back to the USA. Their a cappella and beatboxing of a contemporary song was very different but engrossing. A final rendition of the haka and we were back on the bus, the interaction didn’t stop as we sang “the wheels on the bus” and we were made to share songs from our countries – led by the Chief who couldn’t think of one. We/I did “London’s Burning.” It is really difficult to think of a song under pressure, and the fellow Brits on the bus were not much help.

This was the end of a fabulous day in Rotorua. The 3.5 hour experience, which is regularly cited as NZ’s most awarded tourism attraction definitely took Martin out of his comfort zone, but it made it more meaningful to us. So the next time volunteers are sought – step up. You don’t know what is going to happen, but you are guaranteed to get a first hand experience.