The TripIt app is an app that we used to import all our bookings, this ensured all our booking references and flight details were in one place. Our holiday had been planned meticulously, all by me.  Martin would say to people that he really no idea what we were doing and where we were going one day to the next. Martin had booked the hotels and the cars, but because I had planned the routes and destinations I reckoned that I could keep most things a secret. And because some of our plans were expensive, I rationalised the spend by saying that it was for Martin’s birthday. A birthday that isn’t as significant as it will be next year. Martin is a twin as well, and with his sister in America they celebrated for about 40 hours – which was just as well given the treats in store.

The west coast of NZ is simply stunning. We ran out of describing words, and Martin soon made me take photos out of the car window rather than stop. Some photos I wound down the window for with Eleanor complaining about the draft, others I simply took through the window risking a smudge or reflection. But nothing was as stunning as the two glaciers, Fox and Franz Josef. We stayed at the YHA in Franz Josef for two nights. There was method in the madness. I wanted us to do the helicopter tour, and by staying two nights it gave us a back-up day in case the first day was cancelled due to fog/bad weather. This was looking likely as between Nelson and Franz Josef it had rained pretty much non stop. Pancake Rocks at Punakaiki (just north of Greymouth) were seen in the best possible weather – wet and windy. It did mean that the blowholes were full of action though, but Hokitika Gorge which had been recommended by the Alpine Rose Motel (a recommendation to stay by friends) while pretty, was not as pretty as it was supposed to be (see end picture)… 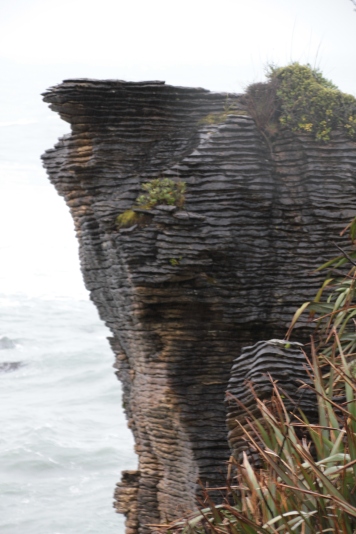 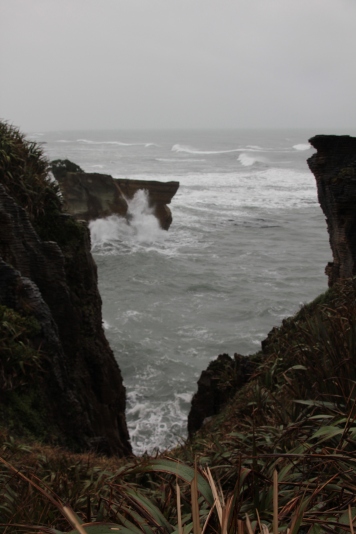 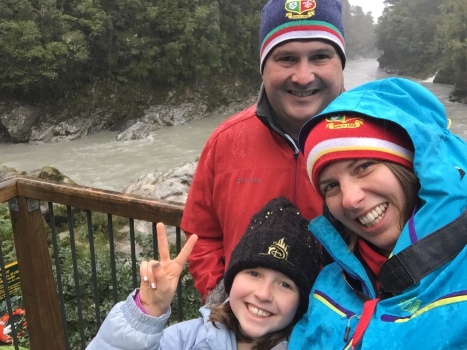 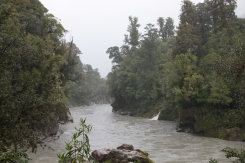 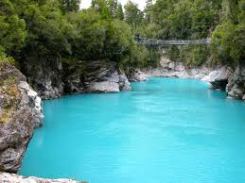 However, when we got to Franz Josef, the weather cleared, and the next morning we went to have an adventure of 8 minutes on Fox glacier. I had booked the twin glacier trip, 2 days before the birthday. 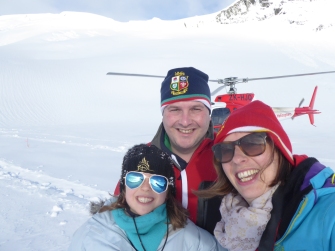 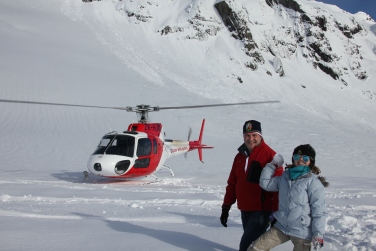 Because it had been raining heavily, snow had fallen on the glaciers.  When the helicopter landed, it then sank down. When we got out of the helicopter, I was first one out after the pilot and it was lovely being the first one out that morning and putting footprints in the snow. Pretty soon though my footprints had been covered up by other people’s! “Walking” was difficult. Only Eleanor was light enough to walk a bit without sinking.  The rest of us would walk lopsidedly and with snow up to our knees. Wading was not an option. This was undoubtedly one of the best experiences we will have. We have never been in a helicopter before, and I can’t foresee doing another trip in a helicopter anytime soon. To see two glaciers from above, and land on one is fantastic. 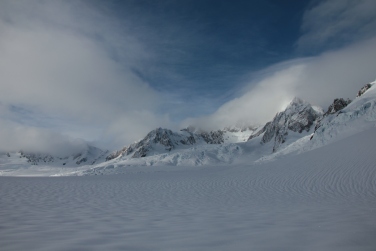 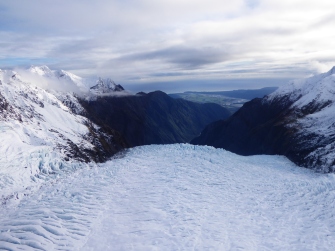 So while that was Martin’s birthday treat from me, Eleanor treated him to Puzzling World at Wanaka on his actual birthday. What else would you get a mathematician?

The night before the birthday we spent at Lake Hawea Hotel. It had been a bit of a drive from Franz Josef and on the way we had stopped at Lake Matheson. The sky was blue and cloudless, some of the ingredients needed to take a perfectly reflective photograph of Aoraki (Mount Cook) and Mount Tasman. The lake is a dark brown because of the natural leaching of organic matter. As we were walking to the lake, Eleanor threatened to throw a stone in.  That would have caused uproar from us and from the few photographers around, we had our own natural lake stirrer in the shape of a duck to cause a few ripples, but only after we had captured a pretty perfect picture. 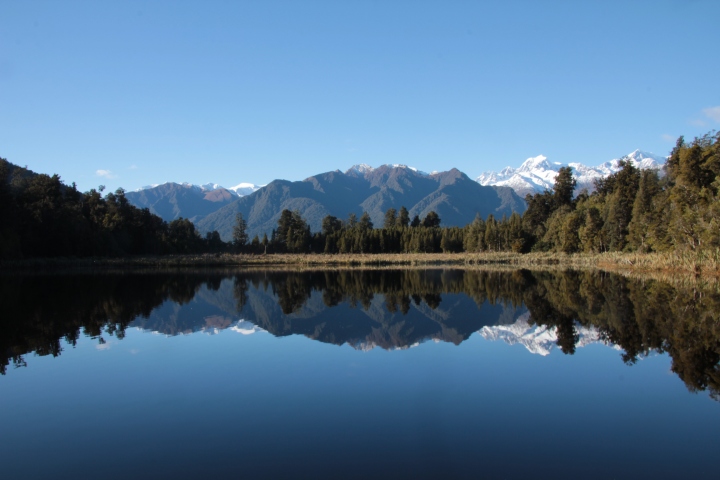 There are “mirror lakes” that we stopped at on the way to Milford Sound, but the picture was not as stunning or as perfect. 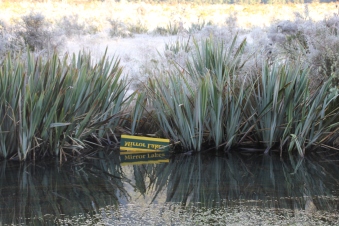 Lake Hawea is 35kms long, and it is this view that Martin awoke to on his birthday. The South Island is littered with stunning views. 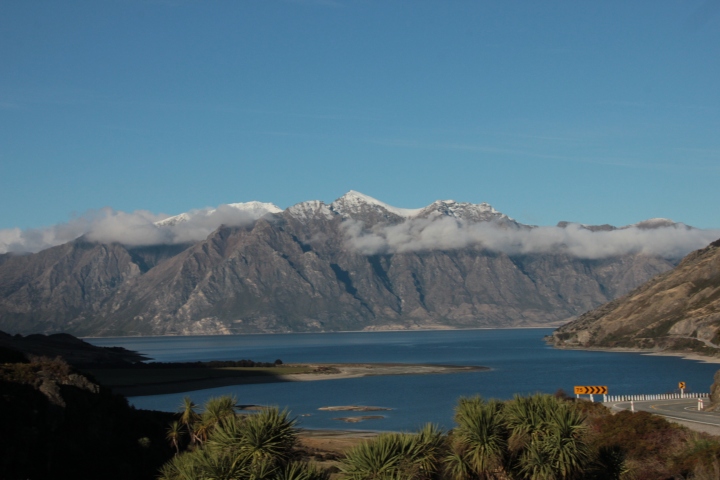 We had mulled wine and lamb shoulder the night before, we were certainly eating well.(Eleanor had a sharing lamb shoulder, almost to herself!) Puzzling World has illusion rooms and an outdoor maze – the objective is not to get to the middle, but to get to all 4 corners. We did it, and got out before lunch. Going to the loo was also an experience. 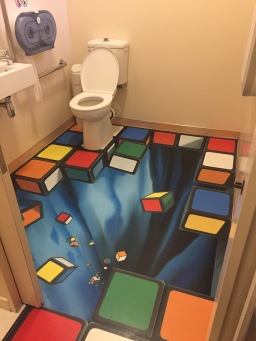 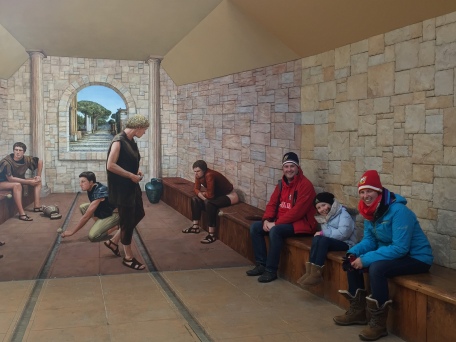 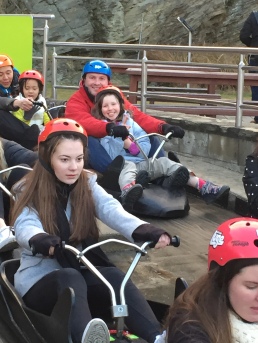 On to Queenstown for the night time adventures. My parents had contributed to an evening of stargazing for Martin at the Skyline. You go up in the Gondola and spend about an 1hr to 90 mins looking at the stars through massive telescopes. As the gondola was included in the price we took advantage of that and tried the luge. I had also booked a buffet dinner at Stratosfare. Eleanor organised a candle on a cake all by herself for Martin, we think she probably spent more time organising this than eating, but she didn’t complain. 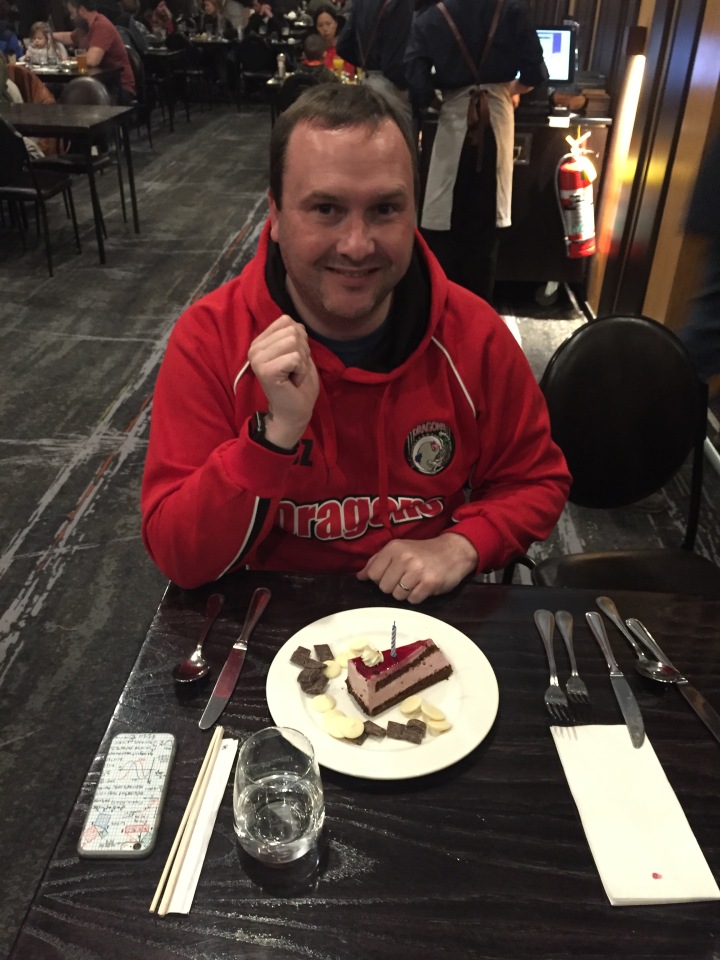 Sadly by the time we came out of the restaurant for the stars, cloud had covered them up. We were offered the next night. Which we took, ate at a lovely restaurant, Lone Star in front of a real fire and then up in the gondola. We were given Canadian coats which were heavy and warm over our winter gear as well. We saw stars that we wouldn’t normally see living in the northern hemisphere, and a bit of the milky way. It was an experience above Queenstown that was well worth it. We would be in Queenstown for nearly a week, courtesy of IHG and all the points Martin had collected we stayed at the Holiday Inn, which while not central, was only 10 or so minutes from town by car (without traffic!).