Mid Autumn Festival according to the Chinese lunar calendar (and traditional solar calendar), is celebrated in the 8th month which is the second month of autumn. As the four seasons each have three (about-30-day) months on the traditional calendars, day 15 of month 8 is “the middle of autumn”.

On the 15th of the lunar calendar, each month, the moon is at its roundest and brightest, symbolising togetherness and reunion in Chinese culture. Families get together eat dinner together, appreciate the moon and eat mooncakes. The harvest moon is traditionally believed to be the brightest of the year.
As a boarding school we are fortunate to get the festival day off (a Thursday) and the Friday making a four day weekend. However, the Chinese are very good at giving something but taking something away and in our case we had worked a 6 day week in order to have a 4 day weekend. The 6 day week was tough going but the 3 day working week that came was lovely! Eleanor’s school, however, only had one day off but instead of making her go to school we went on an adventure.

My relatives, my cousin once removed and her husband (also known as my parents for easy explanation in Chinese!) had booked a 3 week trip to China. They were doing the obligatory sights (Beijing, Wall, Xi’an, Shanghai and Guilin) as well as a weekend with us in Suzhou and because of our bonus weekend we decided to travel north and take them off the beaten track.

Our colleagues thought we were a bit odd to go to Datong, Shanxi province. It has a reputation as a coal mining city. Consequently, it has developed a reputation as one of China’s most polluted cities. So why were we visiting with guests.

From Shanghai Pudong you can fly to Datong airport. However, on a national holiday this was super expensive. So we flew from Hongqiao (no taxi or Uber from school at 4.30 to get to train station so we got school bus to metro station where no taxi would take us to Suzhou main station to get a 25 minute train at 6.30pm so a frantic call to a driver who picked us up at 6.20pm and got us to the airport at 7.30pm in time for our plane at 8.30pm) BUT the flight was delayed until 12.30am. We flew to Taiyuan which is Shanxi’s capital and was a tad cheaper even with a hotel and train fare. We arrived at our hotel at 3.30am. At 11am on national holiday day we took a crowded train (but we had seats) to Datong. 3 hours later we arrived. Sometimes we feel that Suzhou (at 10 million) is quiet, Datong felt as if it was a backwater. (3 million ish people in 2010). Datong is going through redevelopment. But it is being tastefully done and they are ensuring that their wooden structures are also being refurbished in the same style using skills of old.

A couple of hours after that and the family was all together at the Garden Hotel.

The hotel was comfortable enough though our bed was harder than Janet and Tony’s. A bed lottery it seemed.

On Friday at 8.30 we met our driver and van and travelled for about 90 minutes (64 kms) The price of 350 RMB was reasonable for the 5 of us to get there and back.  The Hanging Temple is built into a cliff 75 m or 246 ft above the ground and was described in December 2010’s edition of “Time” magazine as one of the world’s top ten most odd and dangerous buildings. At 125RMB each this was going to be a test of whether any of us were afraid of heights.

Of course we queued for 2 hours. I was thankful for this as it appeared that there were restrictions about how many people could be on this structure at any one time. According to Wikipedia, the structure is kept in place with oak crossbeams fitted into holes chiseled into the cliffs with the main supportive structure hidden inside the bedrock.

I am hoping that the oak crossbeams are not more than 1,500 years old when this temple was orginally founded but none of us thought about that. The temple is noted not just for its engineering but is the only existing temple that combines the three Chinese traditional religions: Buddhism, Taoism, and Confucianism. 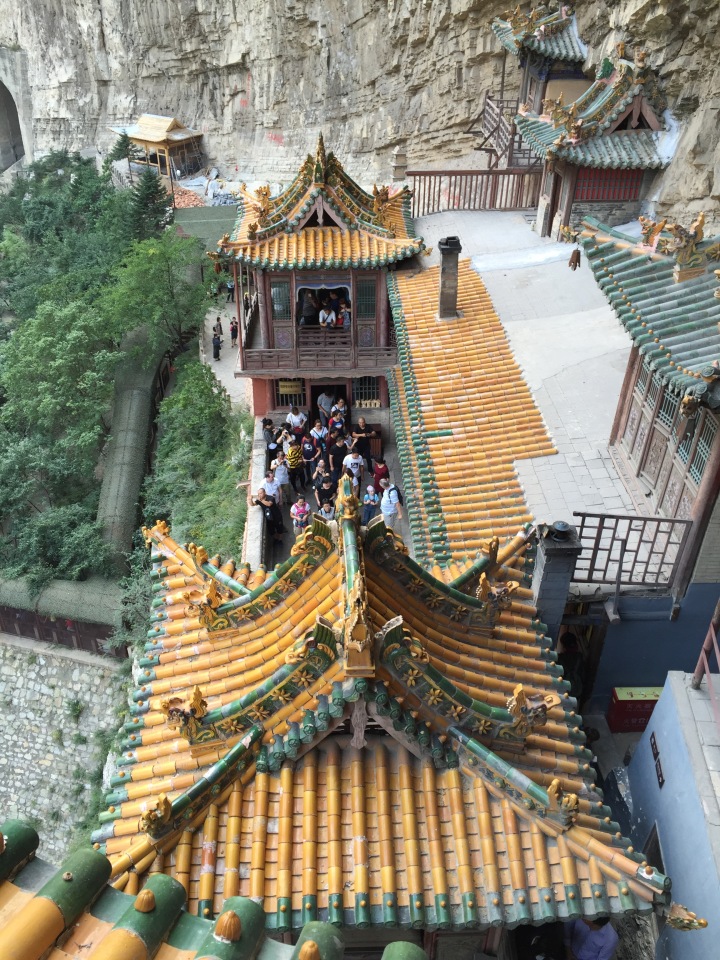 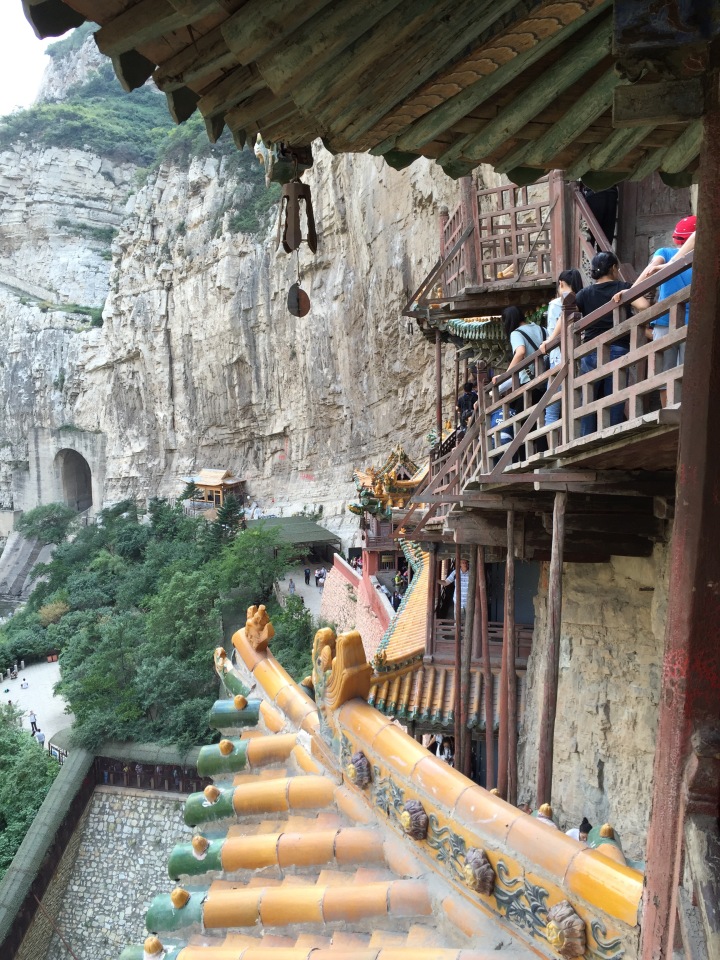 The monastery is located in a small canyon basin, the body of the building hangs from the middle of the cliff under the prominent summit protecting it from rain erosion and sunlight. The temple has been really well preserved and the colours are still vibrant.

This is not a place for the faint hearted. My friend’s husband who had recommended the visit had left his wife and 2 children on the structure having to turn around and go back.  This is no mean feat as once you are on it you are in a one way system. During our time there we heard a very unhappy child. And at one point in the trip I felt very unsure when I was apparently very alone. Martin, Tony and Eleanor where up a level, Janet and I whilst taking photographs had been separated. However I overcame my brief bout of anxiousness and took some more photographs! All reunited at the bottom we went off and had a late lunch.

Back at the hotel we went exploring and found the Nine Dragon Wall which is said to be one of the longest at 45 m long. 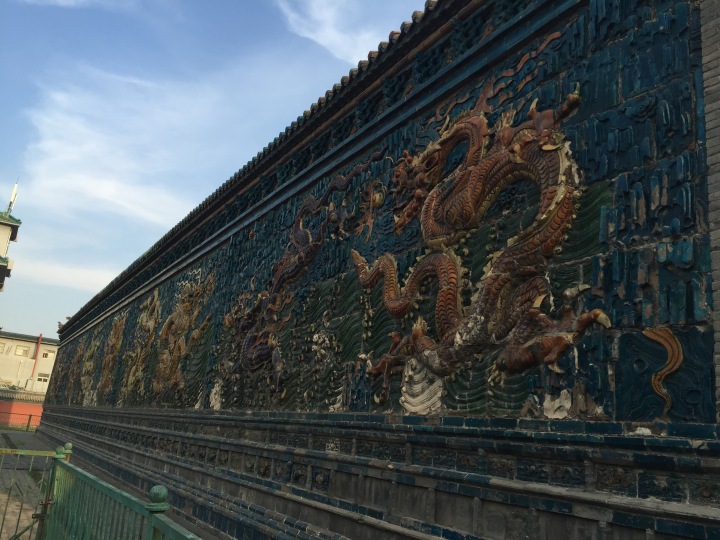 On the Saturday we “negotiated” 550RMB for the driver to take us to Yungang Grottes and a part of the Wall. We were surprised by the price as the grottoes are only 16km outside the city but the Wall was further. Reluctantly we agreed.

Yungang Grottes date from the 5/6th Century and are one of three most famous ancient Buddhist sculptural sites in China. The other two being Longmen and Mogao.

51,000 Buddha statues in 252 grottoes, we most certainly did not see them all but the detail on some of them was breathtaking and the variety in scale was thought provoking.

Having been all buddha-ed out we then went on a mystery tour for lunch.

Like all good Chinese tourist sites you enter one place and come out another. This was no different and we came out onto tat and restaurant alley. But we forged on and got back to the car. I think the driver had expected us to have lunch but we ascertained with his friend’s help that most places had closed so he took us to a “restaurant” where we had noodles and a boiled egg with scrambled egg and tomato. We were clearly the only foreigners who had entered. 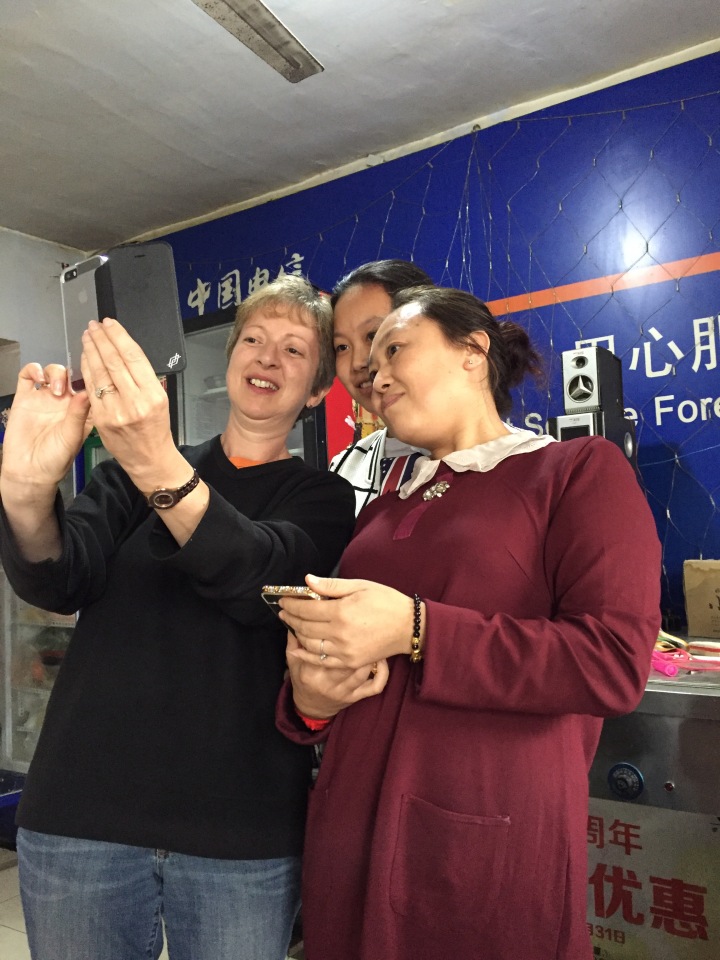 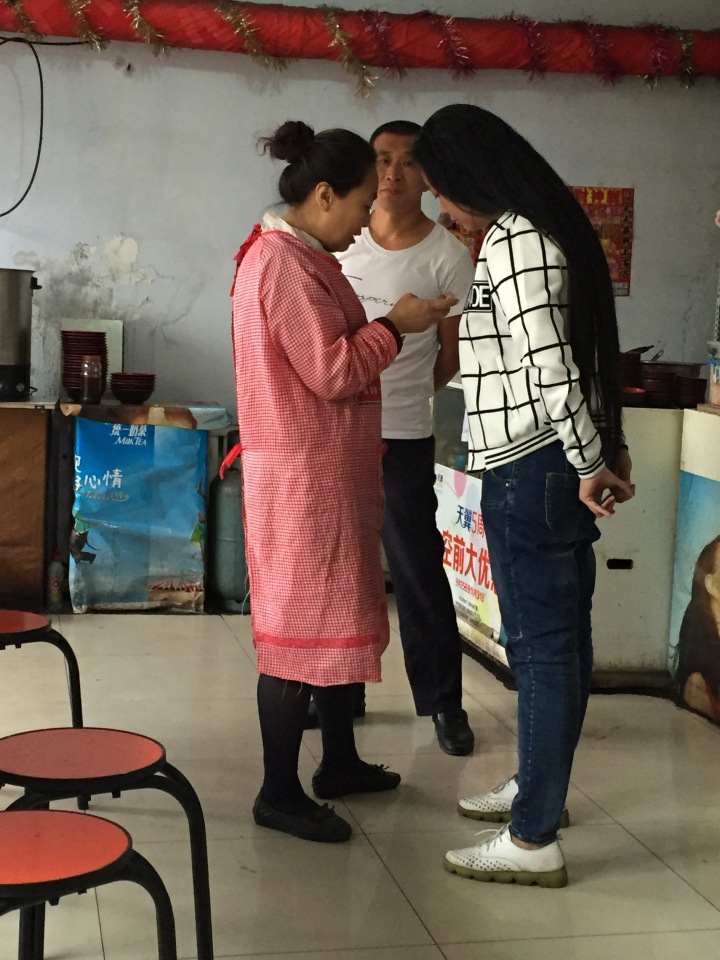 We were taken deep into the country. We were quite close to the Inner Mongolian border when we stopped at this.

We have no idea what this is, or where we were. And when I tried to get my colleague in Suzhou to speak to the driver she came back with “next time get a driver who can speak Mandarin”. He was speaking a dialect and we were none the wiser. The driver was probably having a good old laugh at these foreigners.

Finally we saw the Wall. Or rather a mound of earth. Far less spectacular than the bricked version several hundreds of miles further west. But this section of the Great Wall of China has been stripped bare over the centuries. But you can see that it still stretches for miles. It was good to see the differences and in a way I preferred it.

This weekend had been fun. We headed back to Suzhou, this time flying from Datong to Pudong.

Surely the Temple can’t be open to visitors for much longer but we are glad we have done it and whilst many of out friends wondered what we were doing, they are now looking at visiting themselves!

One thought on “Hanging Around”