On the Tuesday evening we were introduced to the family, all save the husband who would return later. The Mum had 4 children, a son aged around 14, who looked more like a grown man, a daughter aged 13, Bimba, 8 years old and an 11 month old. Over the next few days, we rarely saw the son whose main job was to look after the herd of yaks and horses.

When we arrived Eleanor chose a yurt which would probably have been better suited to the family of 4, as ours was larger. But no-one wanted to swop. Beside us was the family’s yurt, next a grey store tent and finally another guest yurt for Yondo and Khulan. The Dutch family was the end one on the left.

We were welcomed into the family’s tent for dinner and the bowl of salted milk tea. From under the bed a huge metal bowl was produced and some of the contents spooned into a bowl. From that bowl we then helped ourselves to the creamy buttery substance.  It was delicious, again another custom, much nicer than the tea!

Around the yurt/ger were 3 beds, a tv, a cabinet and some shelving.  The stove sat in the middle. 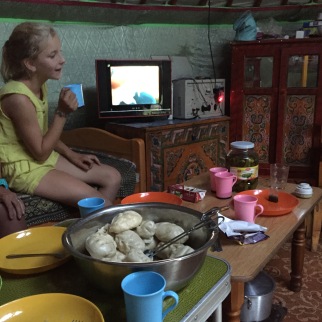 A number of things surprised me – the TV for one, (powered by solar power), the baby crawling about on the floor, close to the stove and 3 beds for 6 people. When Martin, Eleanor and I had stayed in a yurt in Cornwall, the owner had been careful to give us a couple of fireguards to place around the stove in case the toddling Eleanor would put her hand on it or bump into it.  It was therefore a surprise when the baby crawled past the hot stove and no one batted an eyelid.

The sleeping arrangements were Mum and baby as she was still breast feeding, father and son, and the two sisters together. The beds were small doubles. The furniture was all brightly decorated mongolian style. Our yurt was simply decorated and thankfully whilst no sleeping bag had been stipulated on the kit list, the tour company provided us with them, making the beds slightly less hard.

Khulan and Rondo had done the shopping for the family, and brought plastic plates and cups for us to use. Water had been stocked up on, but we were pretty sure the water to make the lipton tea was from the river (boiled!) During the course of the couple of days, some of the kids suffered upset stomachs, nothing serious and we kept everyone’s liquids up with bottled water that we had brought with us.

Bimba was pleased to see Eleanor as a girl of similar age and whilst she did not speak English, and Eleanor did not speak Mongolian; langauge was not an issue when playing or going to collect water. 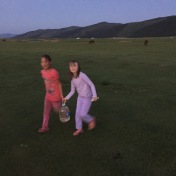 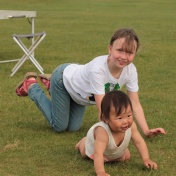 It was dark around 11pm each night, and it was on our first night time trip to the “long drop” that we saw the magnificence of the night sky. Twinkling stars filled the vast black sky, and at that time I wish Martin had been there to see it. It was wonderous and made Eleanor and I get a creak in our necks at looking up so much!

A late night meant a late morning. Eleanor woke up at 9.30am! I had woken up at 8.30am and had been introduced to the head of the family who had arrived back at 01.40am. Given that he and the horses had arrived back so late we were told that we wouldn’t go for a long ride that day.  We knew that some waterfalls were close by but that would probably be the next day’s ride.

Breakfast was a fried dough, a bit like an unsweetened doughnut. A hit all round, and we requested it for breakfast every morning.  The day that it didn’t come, we were all disappointed.

We then went for a ride, the saddles were russian. Still not like a European saddle, but a lot comfier than the wooden Mongolian saddle the herdsman chose to ride on. The seat of the  saddle had a cushion thing and was forgiving when bouncing up and down. 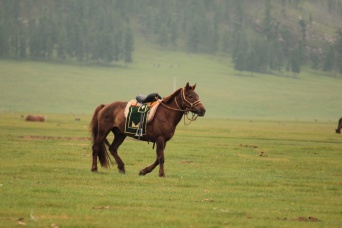 Eleanor without hesitation got on her pony, and Khulan (pronounced Hulan) led her. However, the pony was headstrong and he tried to lead Khulan’s pony rather than the other way around.  He was also a little fast in his walk. This was not appreciated by Eleanor who then stated that she did not want to ride again this holiday. I am pleased she tried, I am also pleased that we were in an environment where she did not have to ride if she didn’t want to. And I was very pleased that she didn’t stop me from riding.

Back at the camp all the kids headed for the river to cool down, and t

hey weren’t the only ones.  Horses and goats were finding refuge on the banks and in the river too. Eleanor washed her hair in it and then we washed her muddy clothes from the monastery in it too. We both felt very native.  Though having watched the family, they bring water to the camp and then wash their clothes!

We spent most of the day by the river, we had a late lunch (mutton in soup).  In the late afternoon Bimba and Eleanor took the frisbee out and then played UNO.

Before dinner, Astrid, her daughter, Khulan, the father and I all went for a ride.  I was given Eleanor’s mount from earlier. The boys and Eleanor stayed behind quite happy, we were going to be going at a faster pace and the boys had been led as well that morning. I realised for myself that Eleanor’s pony was indeed headstrong, and we spent most of the ride leading it.

Khulan proved herself to be an excellent horsewoman and camerawoman as she took videos of us in action. The iPhone capability of “airdrop” came into its own at the end of the holiday when all the photos and videos Khulan, Astrid and I took were shared. No need for wifi or e-mail, just the need for a large amount of memory! Sadly I can’t share any videos with you, as I haven’t upgraded my wordpress account to premium!

The evening ride was full of gallops and adrenaline, and when we got back to the camp dinner of spaghetti, mutton, carrots and potatoes was waiting for us.  We also then toasted marshmallows as it was the youngest Dutch boy’s birthday.  He turned 8.

Whilst the kids were playing, and I was looking at Khulan’s videos, the Mum came up to me and offered me a full mug of clear liquid.  The mug was warm, and my initial thought was it was warm water, quite common in China and so I didn’t think anything of it, save that when I looked at Khulan for confirmation that is was hot water she said I didn’t have to drink it all, I just had to taste it.  As I brought the mug closer to my face, I could smell yak. It was Yak’s Vodka, just recently made, hence why it was warm. Astrid hadn’t been around when this happened, and when she came to sit down I said as nonchalantly as I could, that she should try some too.  However, she reached for a teabag. Quickly we told her it wasn’t tea.  To make matters even more confusing, was that the liquid had come of a 2L coca cola bottle.  Astrid and I had barely let the liquid touch our lips, but each time it was tasted, the mug was filled up again. Finally it got placed in front of a local man who had come to visit the family. He drank it all, got up and rode off.  Astrid and I definitely would not have been in any state to do that had we been brave enough to finish it.

Dusk fell, and soon the adults were playing volleyball with a proper volleyball.  Maybe a previous guest had brought it, but it was a good game.  Then darkness fell about 10.15pm.   Eleanor went to the toilet, but didn’t appear for a long time. I was just about to go and search for her, when she appeared.  She had been helping to herd and separate the kids from the goats in the pen as tomorrow they would be milked.