Whether Katie Melua was right when she sung the song I couldn’t possibly comment but bicycles have been replaced in the main with cars. Something which I noticed the last time I was in Beijing in May 2015.

The weekend just gone was QingMing. The 4th April was the actual day of Tomb Sweeping but it was preceded by a 2 day public holiday. We get a week off and so we were delighted that our friends, The Scotts, decided to spend their hard earned cash in coming to China to see us and of course the country in which we call home.

No longer is it a trip up/down the A303 to see each other. So we were over the moon when in January, they said they would visit us. The trip was planned through Skype/Facetime/Facebook and a lot of emails but with the help of Flight Centre who booked the guides and drivers for us we started our holiday 2 days after the Scotts arrived.

Whilst I had done a little of Beijing whilst on the TEFL course you can’t do Beijing without going to The Wall.

On Saturday we arrived in BeijingNan Train station. We left our flat at 8.45am and got the metro from Nanshi Jie all the way to Suzhou North Station. With 4 adults and 3 kids and 4 suitcases of various sizes we got the train at 10.23 and arrived into Beijing at 4pm. By 6pm we were at DaDong restaurant eating Duck. I had been there with my colleagues in May, and quite frankly there has been no duck as  succulent and as well cooked as the duck in this restaurant.

We had it with a red Great Wall wine. Superb.
Sunday morning we were collected by our Guide, Alice and driver in a minibus! Off to see the Temple of Heaven followed by Tiannamen Square and the Forbidden City. Thankfully I have seen the last two places because Eleanor and I returned to our hotel after lunch as Eleanor has been ridden with the cold since Saturday.

The Temple of Heaven or literally altar of heaven was built in 1420 for the Ming and Wing dynasties to pray and offer up sacrifices for bumper harvests and favourable rain. The gods were looking favourably on us as we were blessed with blue skies. We also had a guide who was extremely knowledgeable and in taking us to the Temple of Heaven first we esacped (or rather Martin and the others) escaped Tianamen Sq and the Forbidden City at a peak time eg the morning!) 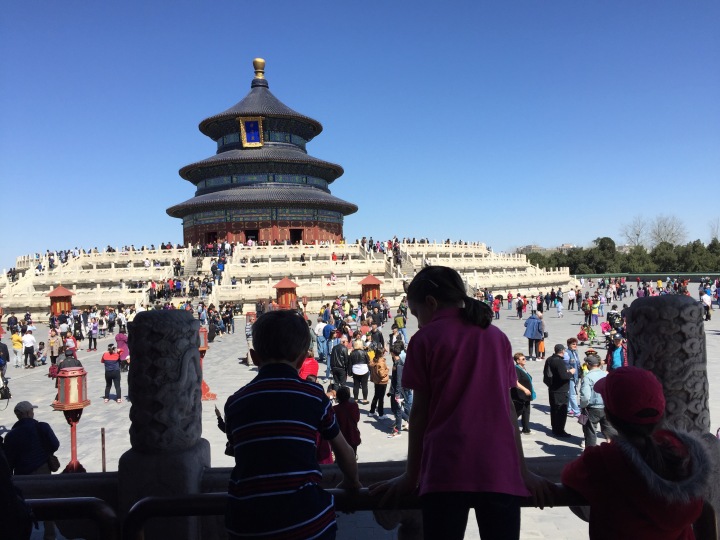 The Temple Roof is blue linked with the sky. The whole area is founded on symbollism. 3 lots of 9 steps to the Circular Mound Altar. 9 representing the Emperor. The Circular buildings all with pillars have a different number of pillars depending on their significance. 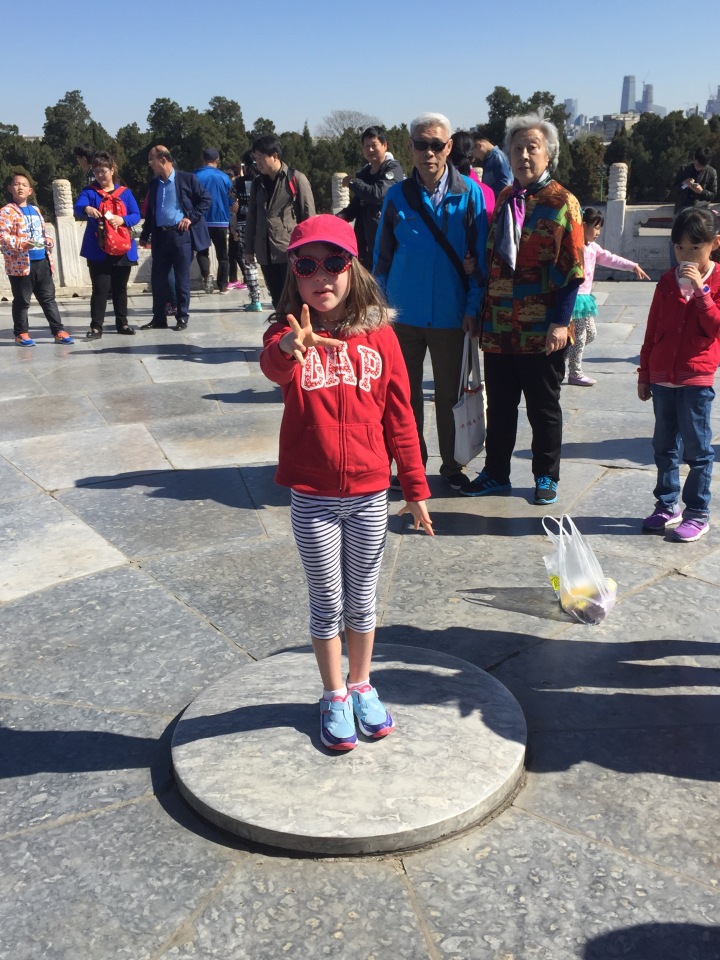 Unfortunately you can’t go into the buildings which is the same for The Forbidden City, but the doors are open leaving you to catch glimpses of the highly ornate painted woodwork of the pillars, ceilings and walls. Even when you look up to the eves of the roofs they are painted. Last touched up in 2005/2006 prior to the Olympics.

The girls in our party got to dress up (for a price of course!) as Chinese Empresses and they had their photos taken. I was duly told off for sneaking a picture on my mobile phone.

The end result for 60 RMB plus another 5RMB to have the picture laminated is of course much better than this snatched one!

Having left the 2.73km squared area (and probably we only saw a fraction of it) we were taken to a government owned tea house. Remarkably having beenin China for 18 months we haven’t ventured in and partaken in a tea ceremony/tea tasting until Sunday 3rd April!

We were taken through how females and males should hold their tea cups. Females should have their middle finger holding the base of the cup, and their ring and pinky fingers sticking out like a phoenix tail. Men should hold it in the same manner gripping it between thumb and forefinger, third finger on the base but the last two fingers rolled in. 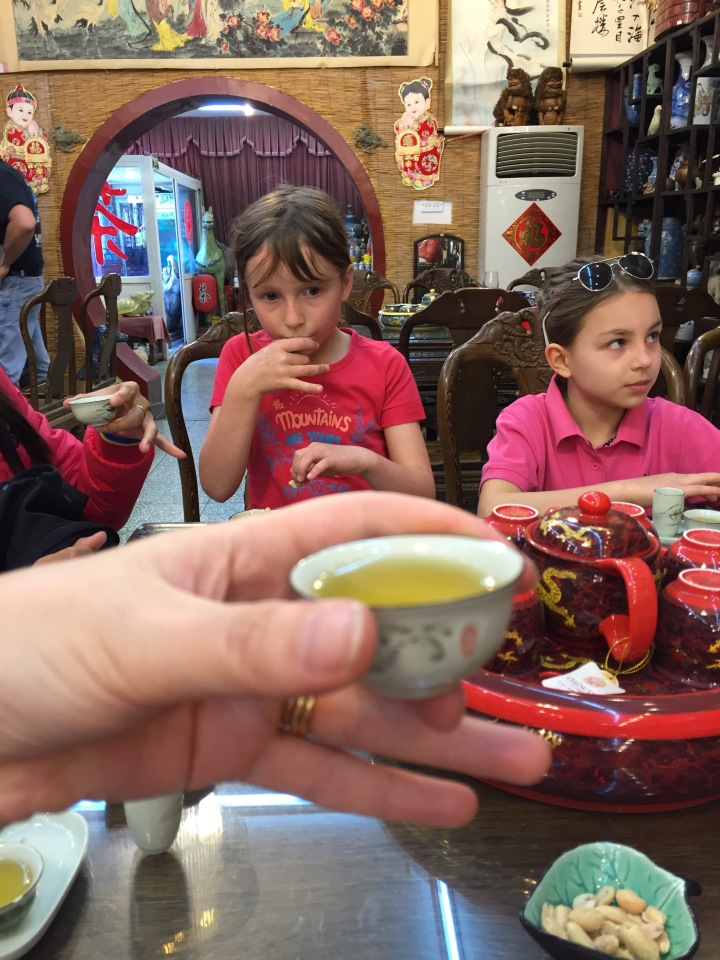 We had 5 teas in all, and peanuts to munch on. An odd combination with the Oolong Jinseng, Black Tea, Lycee and Rose, Jasmine and one other. I only liked the first one, but not enough to then buy it. Rougly £20 for 200g and a free tin and I think something else was free but it was not enough to persuade me to give up my current tea habits. 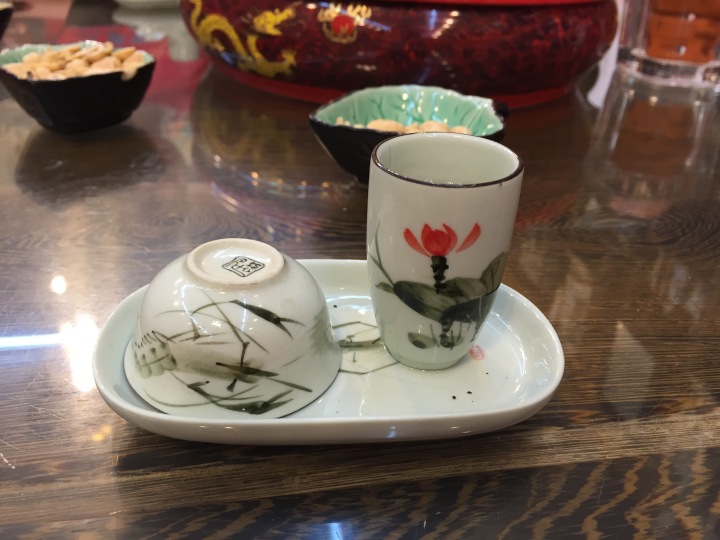 The tea is initially poured into the tall vessel. You place the small cup over the tall one and in one deft movement turn it over. The tea will be left in the small cup. You can smell the tea from the taller cup and rolling it between your hands warms them up.

How the tea looks pre and post water. The stalks are the green tea, rose and … My memory has given up. Sorry.

Tea and nuts consumed it was then lunch. Eleanor and I left shortly after lunch and the others continued to a less busy Sq and Forbidden City.

That night we ate teppanyaki at the hotel. One of Martin’s ex students from the class of Leweston 2005 joined us. We ended up in a private room and ordered food based on writing down numbers and quantities. It was noted that it was like ordering at IKEA!

During the meal two members of staff came in with two shot glasses of baijiu (Chinese white wine). It was explained that they would toast us as we had never eaten there. Quite odd as we weren’t given anything to toast with!

Monday arrived and as it was still a public holiday when the government waive the road toll fees, our guide told us the roads would be busy and therefore we should leave at  7.30am. Today we were going to see The Great Wall. Not all 6700kms of it though.

All of us had been recommended to go to Mutianyu which is heralded as the less busy part. On a public holiday this wasn’t quite so true.  Anyhow we arrived and opted for cable car up and Toboggan down. There are 2 companies that operate here with what we chose as one option and the other option being cable car up and down.

I think most of us imagined a  gondola. But this was by any other name a ski lift. Just without snow, skis and poles to manoeuvre onto the chair.

At the top and tower 6 we turned left and walked to tower 14. Had we turned right I think it would have been less busy. However, whilst we never had a section of wall to ourselves the views were stunning, the white blossom was out and the wall is truly a sight to behold.  Yes there are lots of steps. From the deep to the very shallow you have to keep your wits about you. There is even a glass staircase that has preserved what the wall might have looked like. 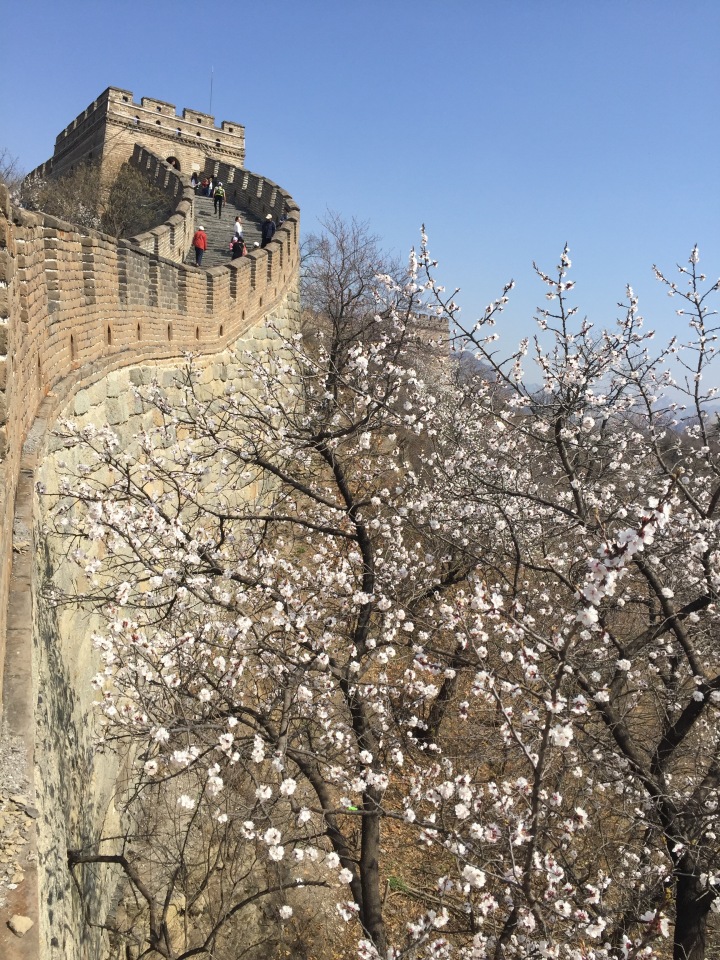 The photos have been taken on my phone. I have not uploaded yet the photos from my camera.

We spent a good couple of hours on the wall and even managed to meet up with our friends that we went to the Yellow Mountains with last year.

Coming down from the wall was great fun. Photography is not allowed. But pictures were taken. And despite being told off by an irate woman for holding everything up, we did not. There had been a woman infront of us who was clearly scared of speed and we had to slow down for her. Safely down we had lunch Chinese style though Subway and Burger King were options too. We were shepherded to a souvenir shop and magnets, snowglobes and a t-shirt were bought. As someone who is usually a UK size 10 buying a t-shirt that states is an XL was a little bit shocking.

Back in our minibus and all adults fell asleep. Though we did wake up as went past Dulwich College Beijing. A massive detour to avoid traffic.

That night we went to an acrobatic show called The Wonderful Han. We were treated to 8 girls on on bicycle, 6 motorbikes in a spherical cage, 2 men running around  on the outside of a huge hamster wheel (blindfolded) as well as diablos like you have never seen them. Amazing.

Tuesday morning saw Eleanor and I resting in the hotel room whilst Martin and the  others went exploring a Hutong.

Next stop Pingyao on the D2005 train from Beijingxi (Beijing West) in Shanxi provice. 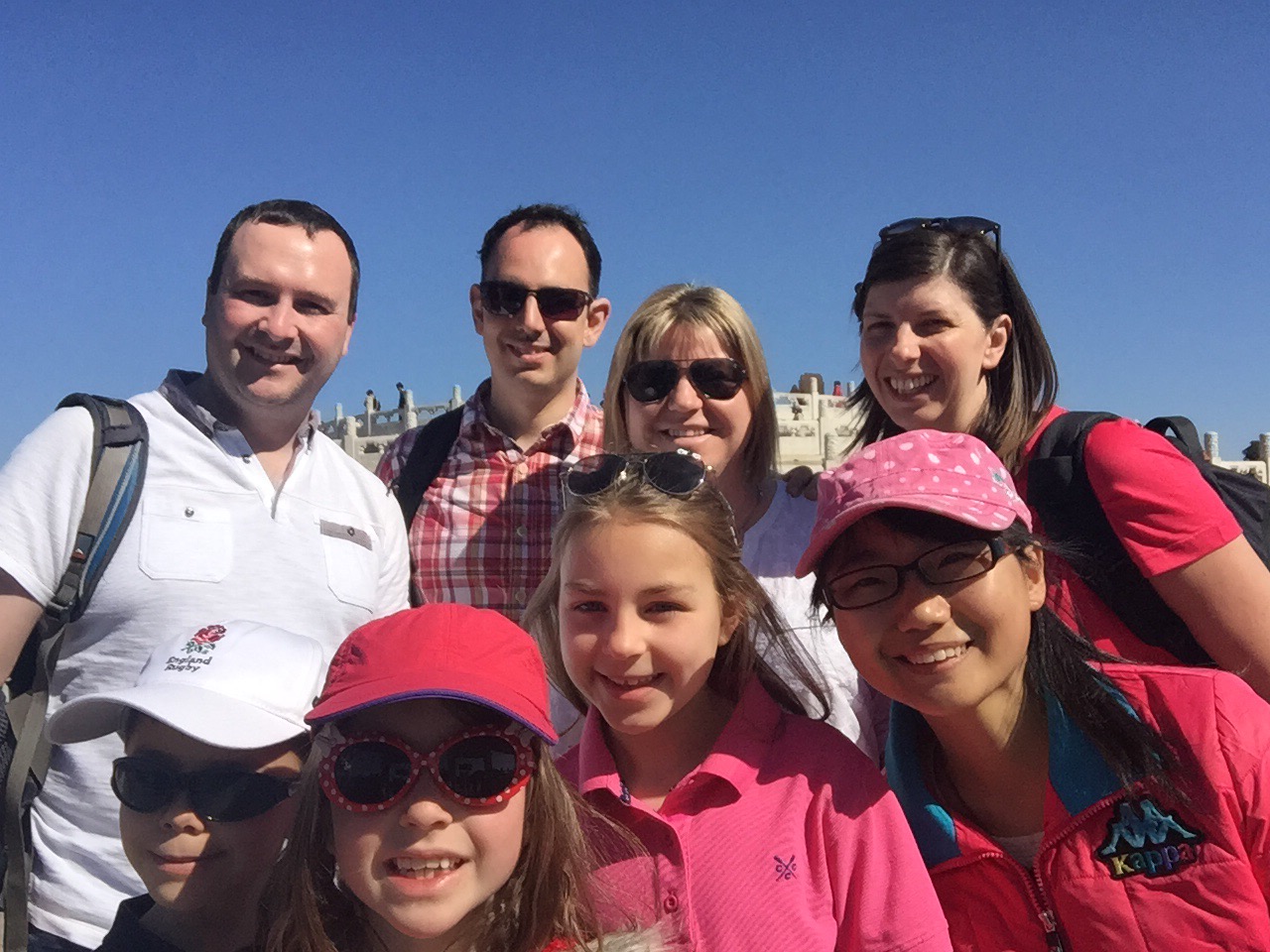 One thought on “There are 9 million bicycles in Beijing”