Eleanor’s school days I hope will hold happy memories, whether they are from Leweston Junior Department, or DUCKS (Dulwich College Kindergarten School) or whatever school she may end up at over the years.  In DUCKS though, each term, 2 consecutive days have been assigned to Art. I have been an active parent, and have been to at least one of the days each term (well maybe only half a day on each occasion!) The first set of days in November 2014 featured Japanese Pottery and Babushka Dolls.  The Teacher chose two cultures that Eleanor has in her class.  I went in for the pottery day…and there was clay everywhere. The children first had to plan their pot and then create it.  Eleanor wanted hers to feature “C” for Crozier, and whilst her plan was excellent, the execution of it, needed to be adapted.  I don’t have a picture of the finished article as I believe it is being featured in the end of year Art display. 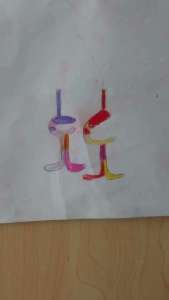 The kids in the class had lots of fun experiencing the texture of clay and they all found out just how messy it can be! The next day, was calmer though a few kids still had pots to finish.  Eleanor’s Babushka Doll was brightly coloured and had “Dear Mummy and Daddy, Happy Christmas” written in it. 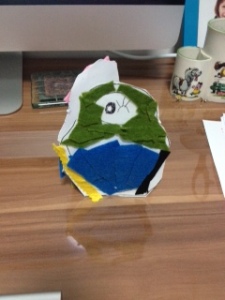 The next two Art days were in Lent Term, March 2015. The first day (the day after my parents arrived) the children were involved in making 3D pictures using birds as inspiration.  The featured artist was American, Frank Stella.

Eleanor’s creation is still in school and no pictures are available just yet!  Mum and Dad did a great job sticking down the “pieces of birds” the children had cut out and painted earlier in the day.  It was to be fair, less than 24 hours since their arrival, but Eleanor was very chuffed that her grandparents had come in to school to help! The next day, the inspiration was  Frida Kahlo, a Mexican artist.  Again the chosen artists reflected some of the nationalities within Eleanor’s class.   We had been asked to provide a formal picture and an informal picture of our children, and so I quickly dug out an old desk calendar which had plenty of pictures to choose from.  Frida Kahlo, was best known for her self portraits, but her life wasn’t without difficulties. On September 17, 1925, Kahlo was riding in a bus that collided with a tram. She suffered serious injuries as a result of the accident, including a broken spinal column, a broken collarbone, broken ribs, a broken pelvis, eleven fractures in her right leg, a crushed and dislocated right foot, and a dislocated shoulder. Also, an iron handrail pierced her abdomen and her uterus, compromising her reproductive capacity. The accident left her in a great deal of pain, and she spent three months recovering in a full body cast. Although she recovered from her injuries and eventually regained her ability to walk, she had relapses of extreme pain for the remainder of her life. The pain was intense and often left her confined to a hospital or bedridden for months at a time. She had as many as 35 operations as a result of the accident, mainly on her back, her right leg, and her right foot. The medical complications and permanent damage also prevented Kahlo from having a child; though she conceived three times, all of her pregnancies had to be terminated. The children were to use their pictures to replicate Kahlo’s “The Two Fridas”. The painting was the first large-scale work done by Kahlo and is considered one of her most notable paintings. It is a double self-portrait, depicting two versions of Kahlo seated together. One is wearing a white European-style dress while the other is wearing a traditional Tehuana dress. Those in the know (Art Historians) believe it is a nod to her dual heritage.

Trinity Term in March saw the School participate in Earth Day.  This time we were asked to provide old material.  A couple of my tops were donated and fabric collages were made in an effort for the children to think about the mantra “REDUCE, REUSE, RECYCLE”. Sadly we have moved compounds where they don’t have recycling bins as they did in our old compound.  But I know, that the rubbish gets emptied out and people pick through the rubbish looking for anything that can be sold on.  But they could save some of the hassle by having it already separated. The clay again made a feature as they made smaller clay pots in order to plant seeds in.   I think the pots have just been painted as sadly it took a while for the pots to be fired ready to be used. The children have also had two school outings since March.  One of which I didn’t go on.  The first one was to Baitang Arboretum which dovetailed nicely into their topic on seasons.  The blossoms were out and the weather wasn’t too hot, and the Year 1’s had a great time.  The Arboretum is where we live opposite now, and Eleanor likes to remind us that she has been there more than we have, she even pretended to be our tour guide when we walked around it for the first time!  It is lovely and peaceful with lakes (big ponds really) and secluded pathways, but it does get busy (negating the peacefulness) at the weekends. The last outing I did go on, was an 1.5 hours away, I was allocated 4 children who were all interested in different things, with only two hands and two eyes on 4 kids – it was exhausting! Hats off to all the teachers out there. Zheng He’s Memorial Park in Taicang is a museum and park dedicated to the Chinese mariner, explorer, diplomat, eunuch and fleet admiral during the Ming Dynasty. Zheng He (1371-1433) made seven expeditionary voyages (eventually dying at sea) to South East Asia, South Asia, the Middle East and East Africa. In his expeditions (1405-1433) he visited Brunei, Java, Vietnam, Thailand, South East Asia, the horn of Africa and Arabia.  On his way, he presented gifts such as silk, porcelain, gold and silver, and in return he received novelties such as ostriches, zebras, camels and ivory. He established routes between China and the Arabian Peninsula and established a Chinese control under the Indian Ocean reaching as far as the Eastern Roman Empire. (Wikipedia) It is said that he even arrived to Australia, as well as some claims that he made it to the Americas. (However, that hasn’t been proved). What is proved is that due to his travels the Chinese emigrated and colonised South East Asia resulting in tributary trade that lasted until the 19th century (Britannica). This man caught the imagination of Eleanor, and I think the rest of her classmates.  It is fair to say that I don’t think any Western parent had any idea who this man was, but what sticks in the mind is that he went to Somalia and thought he had got a unicorn.  What in fact he had was a giraffe.  My oracle is currently in bed, and she will correct me if I have this wrong…but I think the word for giraffe in Somalia, was the same word as the Chinese used for unicorn.  A simple mistake to make! The ships were massive, the size of one and half football pitches, 9 masts, 4 decks and able to carry 500 passengers and other cargo besides.  Zheng He allowed the Chinese to share and trade their knowledge and technology to the world – including the compass and gun power, two very important things that changed the world forever. The school buses that took us were full of excited children on the way there, and parents who were thinking what have we let ourselves in for.  The way back was much quieter as some of the children and their parents fell asleep. 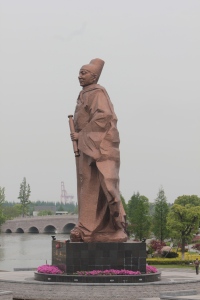 And finally on Friday 8th and Saturday 9th May the School celebrated International Day and Founder’s Day.  Being Northern Irish and Martin being English we fudged it just a little and put her in an Ireland rugby top and a Scottish Tartan.  Truly confused, she went to school and promptly told everyone that “Mummy had forced me to wear this, I am English”. Got me right in the heart! International Day on the Saturday I didn’t see.  I was too busy making Irish Coffees with the other Irish ladies on the Island of Ireland stall.  We were opposite the British one who were selling Pimms, which we just had to sample!  I cringed and gave a bit of a history/geography and political lesson to the British camp who told me that Northern Ireland wasn’t really represented, but that they usually put up the flag to represent Northern Ireland – the flag…the Irish flag…I told them that I would donate a St Patrick’s Cross if they truly wanted NI to be represented! So why didn’t I help with the British stall – simply…. they have loads of British parents willing to help…but the Ireland stall last year was run just by Izara (lady on the right). So if I can support Ireland in the Rugby I can support Ireland at International Day. 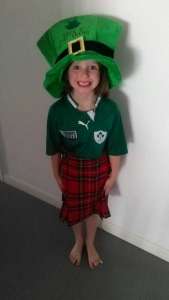 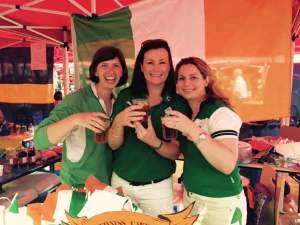