Don’t worry, everyone is still alive!

On Saturday 4th April, Martin, Eleanor and I went to Changzhou for the nuptials of Jake and Barbara.  Both are colleagues of Martin’s and  teach English.  Jake is British, Babara, Chinese.  Changzhou is about 90 or so minutes from Suzhou, but sadly not on a public holiday where all the toll roads are free and subsequently jam packed.  In about a space of a  couple of miles we saw 10 rear end shunts – a reminder that driving in China is hazardous.  There is no lane discipline here, cars weaving in and out of lanes, taking opportunities of the smallest of openings, they really are (most of the time) spatially aware.

Happily we arrived safely.  Jake and Barbara have been married since December, but had chosen the 4th April to have the party.  We found our seats in the ballroom of the hotel, seated around round tables with a lazy Susan in the middle.  The ballroom had a stage and coming from the stage was something ressembling a catwalk covered in red carpet.  The seats and tables where covered in red too, the lucky colour for this nation.

Jake and Barbara wore western style clothing, Barbara wore a white wedding dress and veil, and for Jake a grey morning suit. Jake stood on the stage area and Barbara was walked up the “aisle” by her father.  The Master of Ceremonies was Chinese, was very exuberant in his manner and during the course of the festivities (started at 11am) sang, played Saxaphone and played a Chinese wooden instrument that reminded me of a basic recorder, though the mouthpiece is small.

Favours on the table included packets of cigarettes and little boxes of chocolate – Hershey’s and Celebrations! Having come from a nation that has banned smoking in public places and indoors, it was disconcerting to be sat at a table next to another table where a man chain smoked his way through the large packet of cigarettes over the course of 3 hours!  Eleanor meanwhile scoffed my box, Martin’s box and her own box of chocolates within the same time frame!

While waiting for everyone to be seated we were treated to a slide show of the “wedding photos” that had already been taken over the Christmas period in Sanya, Hainan province (the island where we spent New Year). Pre wedding photos are very popular in China, and we often see bride and bridegrooms posing for photos in Suzhou by the lake or by Tower Bridge. Yes Suzhou has its own replica of Tower Bridge.  These photos are then (usually photoshopped to take out random strangers in the background) displayed at the celebration.

Jake and Barbara’s photos were a mixture of fun ones (posing like James Bond) and formal ones.  3 different changes of clothing for Jake and Barbara, white and red dresses, Western and Eastern suits and shorts and t-shirts for a couple of beach shots.

After the slide show we then had a remarkable video of a history of the couple since they met. This was not an ordinary video, but one through pictures drawn black sand by a local artist. It was set to music with the MC speaking to the clips. It was fascinating and mesmorising to watch.  I had never seen anything like it. Vows were then exchanged. Both got very emotional.  In my head I didn’t think it would be emotional, they were already married, but this public display of their love and their attention to detail was beautiful and very moving.  Their vows or declarations were in Chinese and then the traditional Bristish vows, both of them spoke in both languages.  I cried. Anything with emotive music sets me going. (That is my excuse). Just ask my mum how I could never watch Black Beauty or Lassie because of the music.   The mascara I put on that morning was waterproof – phew. Not always sure of these things when the box is in Chinese.

I am not always a fan of weddings in hotels.  Often you have to move from the ceremony out for drinks and then into the hall for dinner once the photos have been taken. Indeed even in Church or town halls there is always that wait, you have the ceremony then you go the hotel, wait some more before being fed. Don’t get me wrong, I love a good wedding, but during this day there was no waiting for anything.

During the ceremony the food and drink were already on the table. We weren’t sure of when to start eating, but Eleanor who declared herself hungry after the chocolates went straight into the Chinese fare. The rest of us waited until after the vows.  Food ranged from pak choi, prawns, pork, rice, the delicacy of squirrel fish (like sweet and sour chicken but fish!) and terrapins.  (This was probably wasted on us, as I just couldn’t bring myself to try it.) There was a lot of other food that, whilst tasty, was unidentifiable.

All fathers of daughters know that if their daughter gets married, there will be a time when their speech writing needs to be perfected.  So for Jake’s Dad, a father of two boys, he is bound to have thought that he was safe. Not so.  In China, it is the men who pay for the wedding and it is the groom’s father that delivers the speech. Barbara’s Mother also made a speech and even sang.  Finally Karen, who arrived in China the same time as Jake made a heartwarming speech about her two colleagues and presented them with a Welsh Love Spoon.

Then the couple and their families walked around each table who then toasted the couple.  Red pockets (hongbao) were given to the couple but a red pocket was also given to each of the children from Barbara and Jake.

And then the afternoon became just a touch crazy.  Sophie and Eleanor got up on stage (invited) and each sang a Chinese song. Then they sang Let It Go, from Frozen.  Unrehearsed they did well, but neither, at the moment, is a duet singer.  After the musical interlude, the MC produced cuddly toys and they were flung out from the catwalk for people to catch. Eleanor and Sophie collected a lot of toys, but if this was a direct correlation to the women lining up to catch the bouquet then it had the jostling and elbowing, but the meaning was lost on me.

Most women who get married wear their dress once.  I wore mine twice.  I also have two friends who wore their dresses twice. Jake and Barbara, over a 3 hour period, changed their clothing 3 times! Barbara looked gorgeously fabulous. 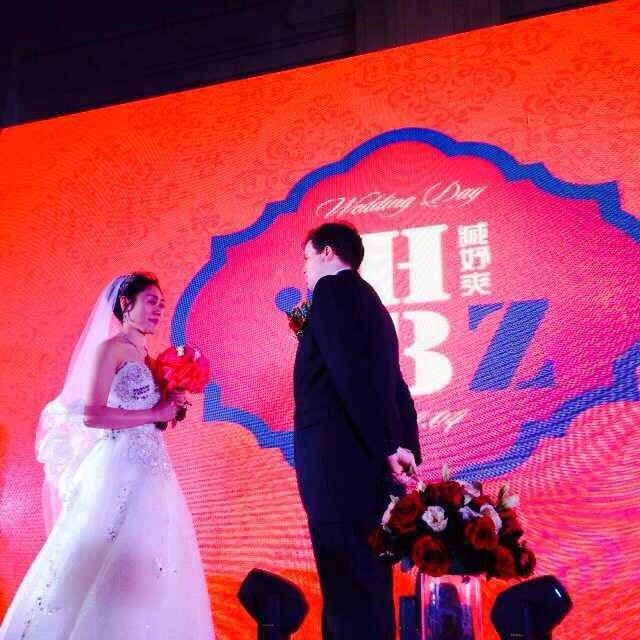 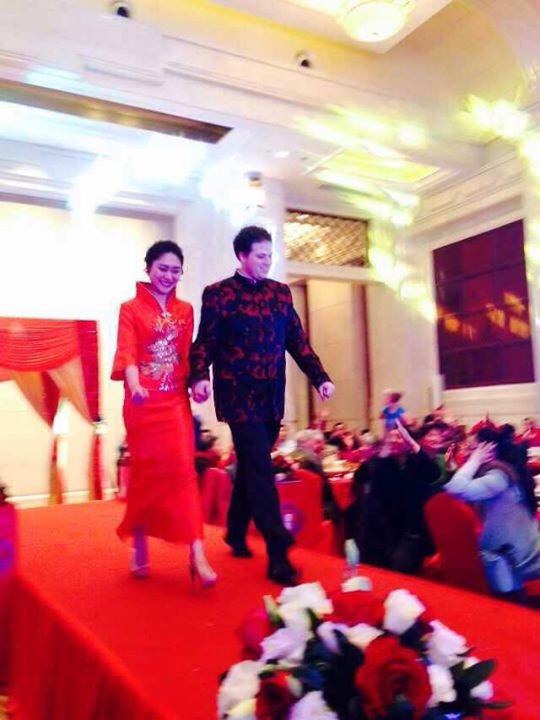 At 2pm everyone left.  It was a really lovely day, both cultures dovetailed nicely into each other, and I came away thinking that the day was informal and beautifully choreographed.  It demonstrated that Jake and Barbara have great family and friends and that this is a couple who are well matched. Martin, Eleanor and I were privileged to have witnessed the nuptials.

Thanks must go to Jake and Barbara for approving this blog and providing the photos of the sand drawings.