Beware this is a long blog… Grab yourself a cup of tea.

Eleanor is in danger of growing up getting used to 5 star accommodation. We don’t particularly want her to just good accommodation doesn’t come at such a premium in this part of the world.  And so it was on this leg that I considered homestay or staying in a Long House. Just to give us some local flavour.

However, I chickened out and opted for the Mulu Marriott instead. It had a small swimming pool, air conditioning and comfortable beds. (Though that didn’t mean we got uninterrupted sleep…)

Our journey there was from Kota Kinabalu airport to Miri to Mulu on a plane with propellors and 68 seats.

Our luggage stayed on at Miri but we had to disembark because we were coming from Sabah into Sarawak so we had to do immigration. (Malaysia has given us quite a lot of stamps in our passports.) Within 5 minutes we were back on the plane. The journey from KK was 45 minutes and we were served glasses of juice. The journey onto Miri was 20 minutes and that was time for a carton of chocolate milk.

Miri has got to be the smallest airport I have ever been to.

The luggage was wheeled over to the arrivals and then put out for you to collect. No luggage carousel here.

Most of the people on the flight got onto the bus for the marriott. Our luggage would follow apparently. The passengers were a mix of european couples and european/australian families. The younger passengers on the plane with backpacks didn’t get on the bus. Neither did the South African engineer who sat beside me who told me he had paid “an arm and a leg” for a guide to go to the Pinnacles. (2 day trek)

The bus was driven to the hotel over a bridge that whilst its main frame was metal and looked sturdy there were wooden planks in the centre which rattled as we went over it.

Check in was relatively simple though as everyone had arrived together it took a bit longer than all our other check ins. We had asked for a river view but ended up getting a jungle view.

Actually, in the end we ended up getting a river view of sorts.

We all went for the obligatory swim. Some people had clearly left everything and  gone straight into the national park to catch the tour of the caves and subsequent bat departure from the cave at dusk. However, we had decided that we wouldn’t rush our day arrival but cram everything into our only full day on the Sunday before departure mid afternoon on the Monday.

Having swum a bit I got out and continued reading Pompeii (Robert Harris). A very good book and indeed very realistic when accompanied by sounds of thunder. Very shortly after the skies began to darken. We returned to our room to freshen up. A tremendous amount of rain fell, thunder rumbled closer and closer and lightening flashed. Thankfully we had 2 umbrellas provided as this is a hotel spread out and only the reception, bar and dining room (and the verandah) were accessible by covered walkways. Martin was a true scout and had brought a raincoat. Though it was too warm to wear it.

Dinner was a buffet though neither of our first choice wines were available. We had  been warned that all the food served is flown in and when it is gone, its gone. Similarly with the wine.

During dinner a number of residents came in absolutely soaked wearing ponchos. They had been the ones to go and see the bats… They didn’t as the bats only come out when dry… Hopefully they would come out for us. Afterall they were going to be hungry.

The next morning and we were up bright and early after going to sleep with a cacophony of rain forest noises.  Opening the curtain we found that our green grassy view had been replaced with a large muddy brown puddle/river. 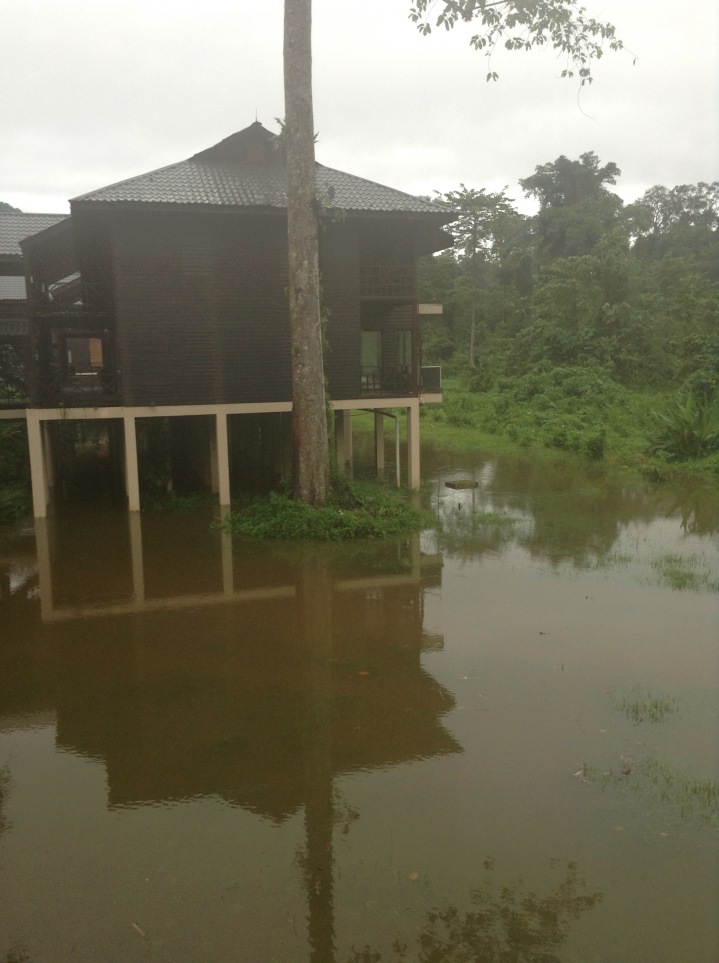 Stepping out to breakfast we looked down to see that where there had been greenery had all been replaced by water. Flash flooding had raised the water levels. We were reassured that the water had on occasion reached the height of the bridge but the hotel had never actually flooded.

Breakfast had and off went at 8.30ish with our guide (we had booked through the Marriott) on a long narrow boat. Lifejackets donned we went on our river journey to a local village. The river was clearly high and had burst its banks on occasions but it hadn’t appeared to affect the locals. We went past a primary school that started at 5.30am, 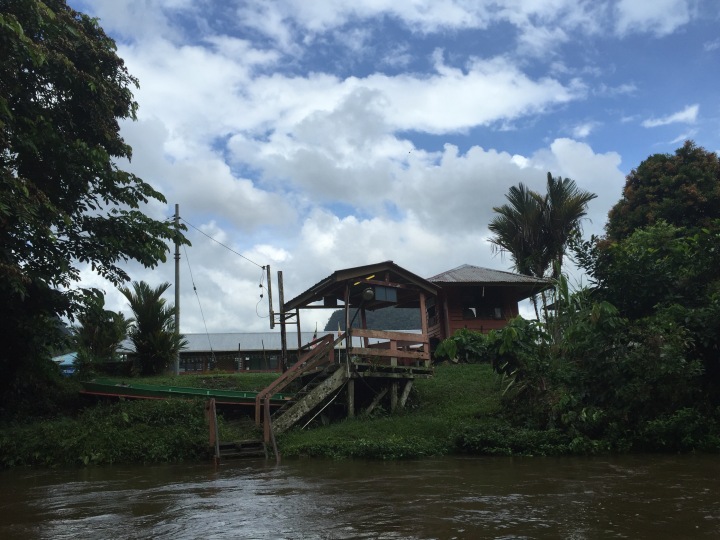 a garage for boats to collect their fuel and a man making a new long boat. We finally arrived at the village which had been built by the government to  attract the locals away from the nomadic lifestyle in the national park. They have set up a market so that tourists can buy local crafts. Eleanor bought some keyrings  for friends and a necklace made out of snail shell.

Sadly we didn’t see the market in full swing as they had been casualties to the 2 nights of heavy rain.   Purchases made we gingerly made it back to the boat.

We made our way to the first of the caves, Wind Cave. So called because there is a narrow passage where you can feel the wind blow. We were given torches. Lighting was subdued and not everywhere. The stalactites and stalagmites were amazing. And of course because it had rained the previous 2 evenings the ground was wet and being dripped on from above was a certainty. We were joined on our tour by 4 Japanese men and a couple from Singapore. Our guide Phillipie was very patient and Eleanor asked him many questions that were both insightful and showed her curiosity.

Having done a circuit of the Windcave the three of us didn’t get back on the long boat with the rest of the group. We decided to walk the 400m on a wooden walkway hugging the side of the rockface and then going through the rainforest to descend to the river and collect the other members of the tour. 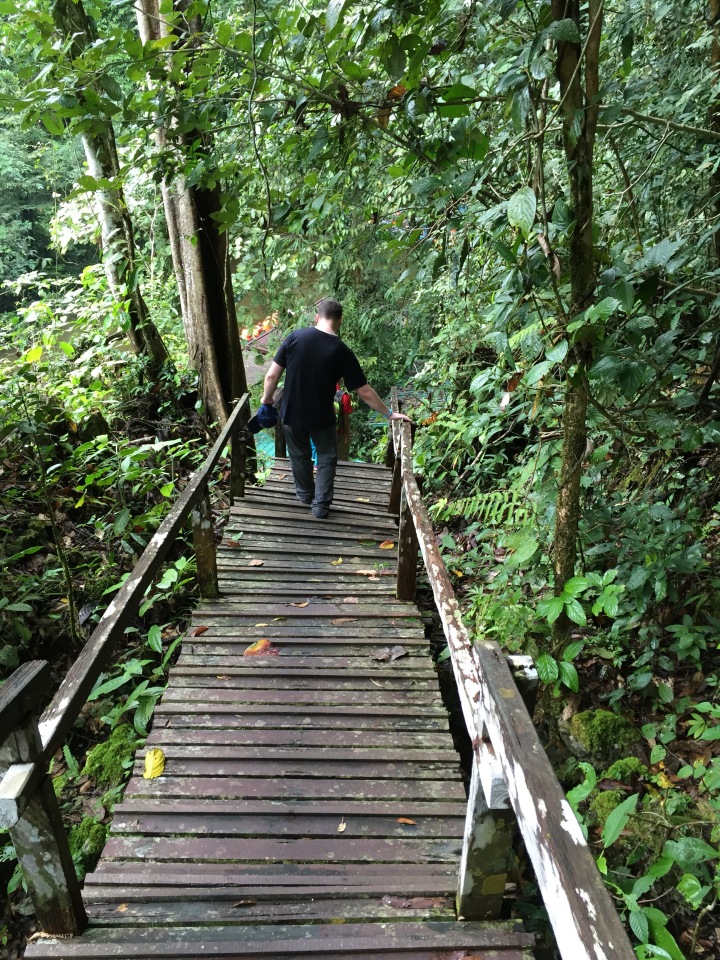 The next cave was Clearwater Cave. Usually people visit this cave, have lunch then go swimming in the river that runs clear. However there was no swimming today. And whilst the youngest member of the group was disappointed she understood when she saw the colour of the river and its fast flowing current.

Out of the cave and back down the steps (over 150) to an area where we had lunch. As part of the tour package with the Marriott we had Bento boxes.

Lunch digested and we were taken back to the hotel. From 08.30 to 13.00 we had a great time. Truly being in the middle of nowhere. 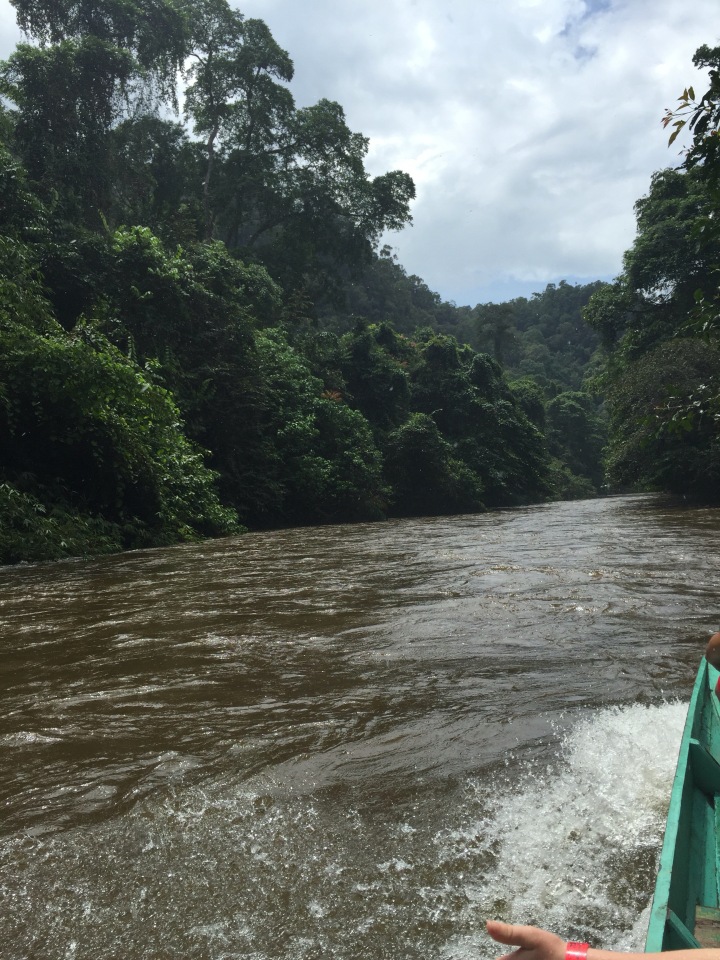 Borneo Part 3 on its way…